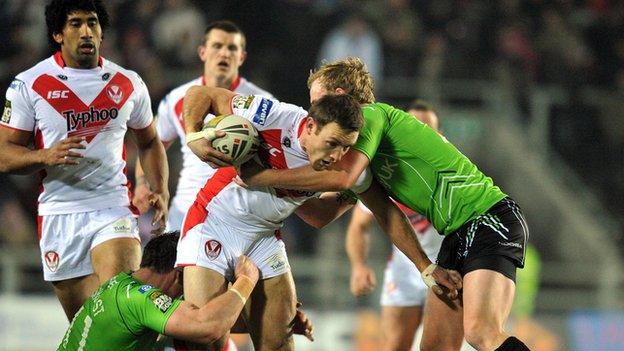 St Helens fought back after a nervy first half to win their first Super League game at Langtree Park.

The hosts totally dominated after the break, James Roby, Francis Meli, Andrew Dixon and Jon Wilkin all going over without reply.

An 80-metre Lee Gaskell break ended with Dixon's second and Antony Laffranchi scored on his debut.

The big occasion appeared to get the better of the visitors when Gaskell's kick-off was badly fumbled but they recovered their composure to play some ambitious rugby and silence the Langtree Park crowd.

And, when England Knights international Broughton went over in the corner, after Joel Moon's sublime back-of-the-hand offload, it threatened to kill the carnival atmosphere.

Reds captain Daniel Holdsworth could not add the extras but the Reds, determined to send the ball wide, found rich reward.

Tight on the right touchline, Danny Williams pushed a sliding kick back inside for Gibson to dab down, Holdsworth this time finding the target with his conversion attempt.

Saints were handed a lifeline when Soliola got the benefit of the doubt, having appeared to be held up over the line, but Tom Makinson's easy conversion hit the post.

With the crowd revived, Saints came back hard and three quick penalties conceded by Steven Wild piled on the pressure, but Makinson's attempt to ground James Roby's kick proved, on video replay, he had missed the ball in grounding.

Salford hit back and Gibson looked to have gone over again moments later but, again with the help of the replay, it proved the ball was held up in the act of scoring.

After the break the hosts lifted their intensity and Roby put them back in the game when he grounded his own kick through.

Makinson added the extras and Meli soon finished off a great move after Gaskell gathered Jonny Lomax's dink over and floated the telling offload out to the New Zealander.

Holdsworth hit a 40-20 and Salford looked to have created an opening on the left only for Chris Nero to knock on.

Man-of-the-match Gaskell gathered a Salford knock on to sprint nearly the length of the field and his kick through handed Dixon his brace before Laffranchi crashed through at the death.

"Having all the great players here and the build-up over the last month or more, it got to us.

"We needed half-time. We spoke about settling down and in the second half it was definitely a big improvement.

"James Roby's been fantastic. Nothing is a problem to him, he just keeps going. He doesn't get a lot of recognition for his defence but he cleans up in the middle of the ruck."

"We spoke in the week about it being a circus tonight and we were hoping to spoil the party. At half-time we were right in the frame to do that.

"They upped the tempo in the second half and we stopped doing what was working for us in the first half. We went 10 or 11 sets when we saw the ball once.

"We had to deal with a lot of adversity. We had eight players that couldn't train until yesterday. We put a lot of effort in but effort alone doesn't win you ball games."