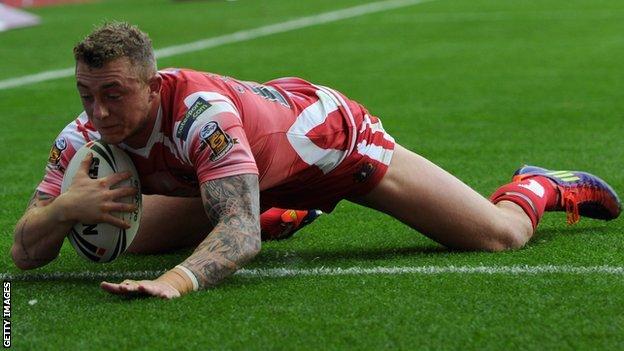 Josh Charnley scored his first Wigan hat-trick as the Warriors got their Super League campaign up and running with victory over champions Leeds.

The winger raced in from distance to open the scoring, before a stunning break from Sam Tomkins set up his second as Wigan led 12-0 at half-time.

Pat Richards kicked a penalty to extend the lead before Darrell Griffin crashed over to give the Rhinos hope.

But Charnley had the final say after bursting onto Sean O'Loughlin's pass.

Victory over the Rhinos was the perfect way for Wigan to bounce back from their surprise home defeat by Huddersfield in their opening game.

I knew the players would respond and they have done

Meanwhile, Leeds' first defeat since losing to the Warriors in last August's Challenge Cup final was hardly the preparation they were looking for ahead of next Friday night's World Club Challenge against Manly Sea Eagles.

But it was certainly a dream evening for Charnley, whose only previously Super League hat-trick was on loan spell with Hull KR two seasons ago.

He was denied an early try by video referee Richard Silverwood for obstruction before opening the scoring when he finished off a fine passing move involving Thomas Leuluai, Tomkins and Darrell Goulding.

Tomkins then sliced through the Leeds defence to send in Charnley for his second try, Richards adding a penalty to his two conversions soon after the restart to give Wigan a 14-0 lead.

Griffin charged over from five metres for his first Leeds try to cut the deficit but Charnley made the game safe with an easy touchdown to complete his hat-trick after O'Loughlin had combined superbly with Brett Finch and Leuluai.

"It was a big improvement. I'm very content tonight. I knew the players would respond and they have done.

"It's been a tough week. I couldn't wait for this game to come and neither could the players.

"Last week against Huddersfield, that wasn't us. Today we showed a lot of character, guts, enthusiasm and a lot of skill against a very talented Leeds team.

"It's about making sure we turn up with the same attitude against Bradford next week."

"Wigan were always going to be tough today. We talked about this being a 12-round world title fight and it had a feel to that. We just couldn't land enough punches.

"I didn't think we were massively poor but there were too many areas where we were off tonight.

"I wasn't excited by anybody's performance but I wouldn't say anybody was poor."