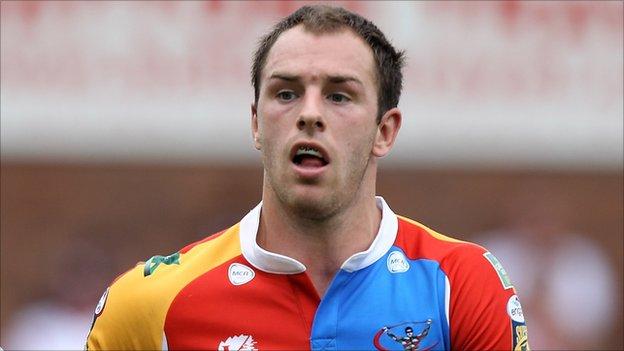 Bradford secured their first win of the Super League season with a 20-12 victory at rivals Castleford.

Tries from Jarrod Sammut and Tom Burgess gave the Bulls a 12-0 half-time lead on a chilly day in West Yorkshire, Luke Gale adding the extras.

Mick Potter's hopes for a brighter second season at Odsal were dented with last weekend's home defeat by Catalan Dragons.

We threatened to score quite a few times but we were pulled up short. We just weren't as clinical as we could be in attack

But his side started well at The Jungle, Elliott Whitehead being denied a try on his first appearance of the season by the recovering Owen, while Adrian Purtell was held up at the line.

But it was not long before the Bulls' pressure was rewarded, Gale's high kick finding Sammut via a pass from Kearney, and Gale was on hand to add the extras.

The home side sought a route through the Bradford line, and only some last-gasp scrambled defence kept Adam Milner, Rangi Chase and Stuart Jones at bay.

However, the visitors made their chances count, doubling their lead before the hooter when Jamie Langley fed Burgess, and Gale again converted.

Cas coach Ian Millward's return to Super League after a spell in the Championship with Leigh began in winning fashion at Salford a week ago, and the Australian's half-time words appeared to have an effect.

Gale's kick fell short of touch from a penalty, and Castleford responded, putting together a flowing move involving Chase, Owen and Ryan McGoldrick before one-time academy product Griffin found an opening to score.

Accuracy was the byword for former Harlequins half-back Gale who added a penalty and then a conversion after Kearney popped out from a scrum to cross from inside the 20-metre mark.

Millward's side kept up the fight, but Owen's late try and Dixon's conversion were mere consolations.

"A week makes a big difference. The players were pretty determined to have a better outcome. It was about hard work.

"We were under a whole heap of pressure either from our own doing from losing the ball or getting marched downfield from penalties.

"But our tryline defence was excellent. Our players defended so well to keep Castleford out for long periods."

"Bradford were terrific and the better team won. We were just a bit off the pace attacking-wise.

"It was very heavy underfoot but I thought we had a lot of opportunities to score tries. Our completion was quite low in the first-half but Bradford's was very high.

"We threatened to score quite a few times but we were pulled up short. We just weren't as clinical as we could be in attack."