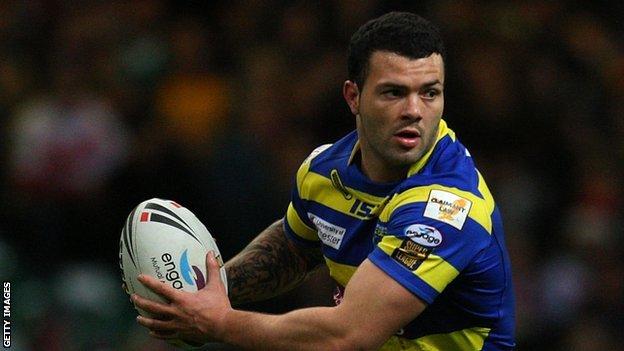 Stylish Warrington ran in nine tries as they came from behind to ease to a comprehensive win over London Broncos.

Michael Witt converted his own try as the Broncos took a shock lead.

But Wolves bounced back to lead 22-10 at the break thanks to two Chris Bridge tries and scores from Joel Monaghan and Ryan Atkins, Michael Roberton replying.

There was no let-up in the second half as Monaghan and Atkins scored again, Stefan Ratchford also crossing before Lee Briers grabbed a late brace.

It was a welcome first win of the season for last season's League Leaders' Shield winners, who had been held 20-20 at Hull in their first game of the new campaign, while the Broncos have opened with back-to-back defeats.

The Londoners, who welcomed back centre David Howell after a six-game suspension for biting, had been beaten 82-6 on their last visit to the Halliwell Jones 11 months ago.

They took the lead against the run of play when Witt stepped inside the Wolves defence to touch down.

But, from then on, it was one-way traffic, Bridge crashing over following a quick tap penalty and defence-splitting pass from Briers, back in the side after being dropped at Hull as a disciplinary measure.

Briers and Bridge then combined for Monaghan's first try, before Monaghan palmed Briers' cross-field kick into the path of Bridge for his second score.

Former Wales international half-back Briers was in the thick of the move for Warrington's fourth try too, releasing Atkins with a quick tap restart before the pair swapped passes for an 80-metre score.

Robertson squeezed over in the corner to reduce the arrears before the break but the Wolves put the result beyond doubt with two tries in the first six minutes of the second half through Monaghan and Atkins.

Close season signing Ratchford grabbed Warrington's stunning seventh try, his first for the club, collecting a bomb on his own line and sending Rhys Evans clear before taking the winger's pass for a spectacular length-of-the-field score.

But it was left to Briers to have the final say as he crashed over twice in the last 10 minutes, converting both tries.

"I thought we were really patchy in the first half, but I was really happy with the second half.

"We are still coming to terms with this year's different interpretations. It's a slow style we're playing and once we came to terms with that we controlled things better.

"All the games so far have a different pace. That's the way we're playing now and we will take a little time to adjust to those sorts of things."

"The players are not happy with the way they went and know we need to have a good response next week.

"There will be no knee-jerk reaction but we will need a good week of training in order to prepare for next week.

"There were some things that were clearly not good enough which we need to do better in order to give ourselves a chance.