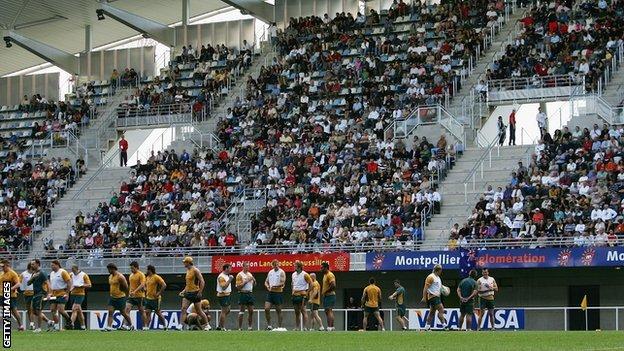 Catalan Dragons are to move their Super League home game against Wigan from Perpignan to Montpellier, 100 miles away, for the second year running.

But the French side have this time opted for the 32,900-seater Stade de la Mosson on Saturday 9 June.

"It should be one of the peak events of our season," said managing director Christophe Jouffret.

Last season's fixture attracted 9,372 to the Yves du Manoir, but due to work being done on the pitch, the club have this time gone for the larger capacity La Mosson football stadium, rebuilt in 1998 to host six games at the World Cup.

It also hosted group games at the Rugby Union World Cup in 2007.

"Montpellier is a strategic, political, economic and sporting centre," added Jouffret. "It is important that we relocate this match.

"The city of Montpellier will give us a warm welcome there. And, because of the renovation of the pitch at the Yves du Manoir, where we played last year, it is the football ground at La Mosson which will host the game."

Catalans, who rose from bottom in 2010 to finish sixth in last season's Super League, made a winning start to the new season on Saturday, winning 34-12 at Odsal.

They play their first home game of the season this Saturday when they host Hull FC at their usual headquarters in Perpignan, at the Stade Gilbert Brutus.