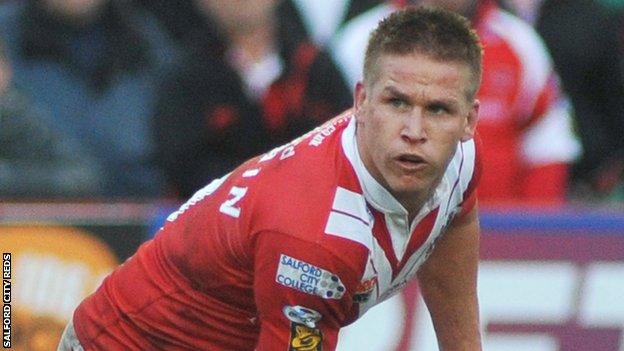 Salford could be without hooker Wayne Godwin for up to two months with rib cartilage damage.

The Reds' only experienced hooker was taken to hospital after suffering the injury eight minutes into Saturday's 24-10 home defeat by Castleford.

"Wayne's out for a while," said Salford coach Phil Veivers. "It's probably worse than a break."

To worsen the blow, his replacement, new signing Stuart Howarth went off with concussion 14 minutes from time.

But, after being hit full in the face by the ball, Howarth is expected to fully recover in time for Friday's visit to St Helens.

Salford's only other recognised hooker is 19-year-old Gareth Owen, who made three substitute appearances in Super League in 2010.

Godwin's blow was the second successive season that he has got the new campaign off on the wrong foot.

He was sent off on his Salford debut in last year's opening defeat by Crusaders at the Millennium Stadium and banned for two matches.