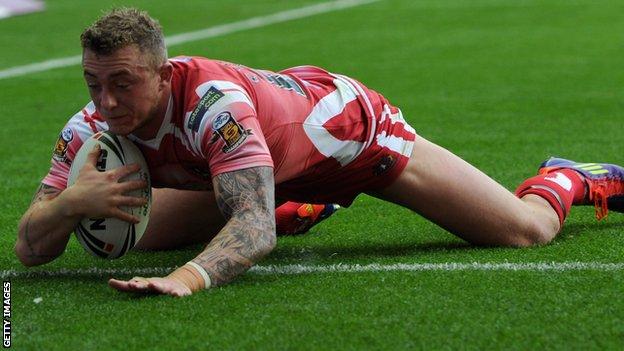 Wigan head coach Shaun Wane has praised the response of his squad following the opening day defeat to Huddersfield.

Saturday's 20-6 win over Leeds was Wane's first since taking from Michael Maguire at the DW Stadium.

"I'm really, really pleased with how we went and how we trained this week," he told BBC Radio Manchester.

"I 100 per cent knew that we would respond. I knew that team that played last week wasn't Wigan standard and the players knew that."

Wane, 47, described himself as 'gutted' following that home defeat by the Giants but his players responded with a much-improved performance against champions Leeds.

The Warriors raced into a 14-0 lead with two tries from winger Josh Charnley, Pat Richards converting both, as well as adding a penalty.

Despite a late try from Charnley to secure his hat-trick, Wane reserved praise for the performance of his forwards.

"Josh did OK," added Wane. "But he made a couple of defensive errors that we need to fix.

"I'm going to praise the middle unit. They were the ones that ripped into them, that ran in and belted them.

"It's been a tough week for me. I'm not a good loser and I was hurting after last week and so were the players."

Meanwhile, young prop Tom Spencer, who made his Super League debut in the win over Leeds, has joined Championship neighbours Leigh on a dual-registration contract.

The Warriors say the system, which allows the 20-year-old to play for both clubs, has worked well for them over the last two seasons.

Players, like Charnley at Hull KR two years ago, have been able to gain experience of a higher level of competition than simply playing in the Under-20s.

"We are very comfortable with the environment that Leigh provides," said Wigan's rugby manager Kris Radlinski.

"We know that Tom will gain a great deal from this experience.

"Every party benefits out of the arrangement with the player getting valuable playing experience at Championship level and Leigh receiving a high-quality young player to add to their playing squad."