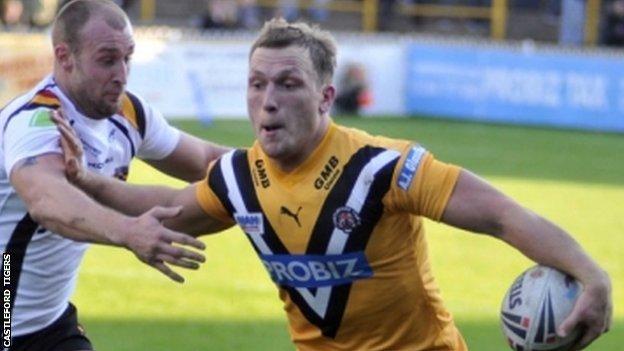 Castleford winger Josh Griffin ran in a hat-trick of tries but ended on the losing side as Catalan Dragons staged a stunning late fightback.

Griffin touched down twice and Joe Arundel also crashed over as Cas led 16-6 at the break, with Thomas Bosc replying for the hosts.

Vincent Dupport reduced the arrears before Griffin completed his treble.

But two Daryl Millard tries and another from Jason Baitieri in the final 25 minutes sealed a stunning comeback.

Cas made a dream start when a long cut-out pass by last year's Man of Steel Rangi Chase found Griffin in plenty of space, freeing the winger to dive over in the corner.

But home full-back Clint Greenshields then came into the line to create an overlap, allowing winger Bosc in for an equalising try.

From out wide on the left, Scott Dureau added the first of four conversions to give the Catalans a scarcely-deserved 13th-minute lead, following which Steve Nash and Baitieri were both sent to the sin bin for their involvement in a brawl sparked by a Castleford high tackle.

Griffin then pounced on a mix-up between Leon Pryce and Sebastien Raguin to race in from 40 metres out and touch down under the posts.

Dixon this time made no mistake with the conversion, also kicking the goal after Chase bumped off an attempted tackle from Dureau to send Arundel clear for Cas's third try to earn a 10-point interval lead.

Four minutes into the second half, with coach Trent Robinson's words ringing in their ears, Catalan pulled one back when a short-side play by Ian Henderson found Dupport and the France international scored one-handed in the corner despite the attentions of three Cas players.

After Dureau missed the conversion, Griffin then cashed in on an overlap to complete his hat-trick, taking his Super League try haul to five for the season.

But the Dragons had a sting in the tail once Henderson's kick to the left found Millard who dived over to score on 55 minutes. Dureau added the conversion to narrow the gap to four points.

Pryce and Greenshields created the opening for the supporting Millard who touched down to level the scores on 69 minutes, with Dureau adding the extra to give the Dragons the lead.

Then, with seven minutes left, Dureau and Steve Menzies both threw dummies to allow Baitieri in for the Catalans' final try, Dureau's kick sealing victory.