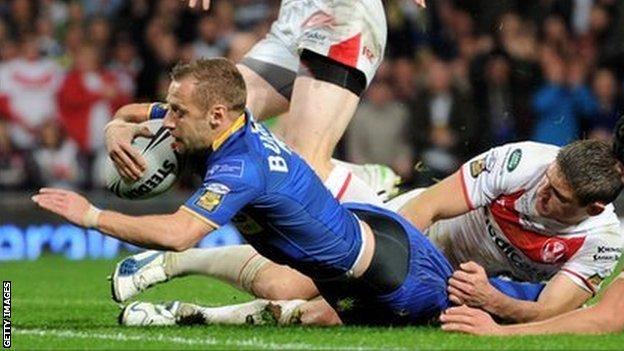 Rob Burrow was the star turn when Leeds Rhinos claimed their fourth Grand Final victory in five years back in October.

Now, four months on from that stunning match-winning display at Old Trafford, Burrow is excited at getting the chance to shine on home soil at Headingley.

Friday's meeting with Manly will be Leeds' (and Burrow's) fifth World Club Championship appearance, but their first at their Headingley HQ.

"It doesn't get any better than a packed Headingley," he told BBC Sport.

"It will probably be jam-packed. It hasn't been for a few years. But there's no better stage and it will make for a great atmosphere."

Burrow has mixed memories of Leeds' four previous World Club Challenge appearances - all of them across the city at Elland Road, which has over double Headingley's 17,500-capacity.

In the Rhinos' first final, having come off the bench, Burrow finished off a dazzling move to run in the fifth of his side's seven tries in a 39-32 triumph over Canterbury Bulldogs.

And he was on the winning team again in 2008 when Leeds were 11-4 winners in the first of their two meetings with Melbourne Storm.

But Leeds' last two meetings against Aussie opposition did not go so well.

Having passed a late fitness test on a back injury to play against Manly the following year, Burrow was laid out by an early tackle from Anthony Watmough and failed to reappear for the rest of the game as Leeds went on to lose 28-20.

"I can remember bits when I have watched it on television," he said. "But not much else!"

Then, in 2010, in the return against Melbourne, it was a first-half injury to skipper Kevin Sinfield that proved crucial.

Burrow took over Sinfield's captaincy and kicking duties, landing two penalties. But, with a string of refereeing decisions by Richard Silverwood going against them - which were to earn Burrow's team-mate Keith Senior a post-match reprimand for his comments, Leeds ended up losing 18-10.

Now they have the chance to put right a sequence of results that has seen English clubs lose the last three World Club Challenges, on the back of a run of five straight victories prior to that between 2004 and the Rhinos' second win over Melbourne 2008.

"We're out there representing the Super League in England and this is as big as it gets," said Burrow.

"We were talking about this game even as we were running round the pitch on the lap of honour celebrating at the Grand Final in October, about having the chance to represent our country.

"It's Super League v the NRL, and obviously England v Australia too, which always makes it that extra bit spicy.

"I've been lucky enough to win some trophies with Leeds and, although the Aussie season hasn't started yet and they've had different preparations to us, we know we'll have to be at our best."

The Rhinos go into Friday's match on the back of last Saturday's 20-6 defeat at Wigan, having started the defence of their trophy eight years earlier with a fairly comfortable six-try 34-16 win over Hull KR. But Burrow insists that loss will not have affected them.

"Obviously that was a bit of a downer for us, going to Wigan," he said. "We'd have liked to enter the game with two solid performances and two wins.

"That wasn't the case but we've put that game to bed now, we've been putting things right in training and all focus now is just on Manly."

After voicing frustration at his role in the second half of last season as an impact player, Burrow has started both games for the Rhinos this season - both at hooker, following the departure of Danny Buderus. And he hopes his days coming off the bench are now over.

"Being on from the start of the game just gives me that extra bit of time to hopefully have an influence on the game," he admitted, "so, yes, I'm enjoying it and hopefully that will continue.

"It's great just to be playing for a great club like Leeds Rhinos but certainly starting again this year is what I want to do."