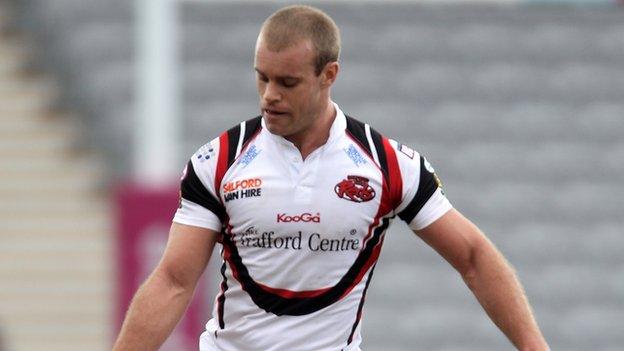 But, after going 10-0 up thanks to two tries from winger Ashley Gibson, the Reds had to come from behind.

Two first-half tries on his debut from Hull scrum-half Brett Seymour and one for Wade McKinnon put Hull in front.

But tries from Matty Ashurst and Sean Gleeson after the break were converted by Holdsworth, who slotted the winning penalty two minutes from time.

Beaten at home by Castleford on the opening weekend, Salford then lost at St Helens before picking up their win of the new campaign in last weekend's local derby at Widnes. But it meant a bit more to claim a first victory at their brand new £26m stadium.

Holdsworth was involved right from the first whistle to the last, his chip-kick being collected by Gibson to cross in the corner.

Gibson then scored again from Gleeson's superb flick pass midway through the first half.

But Hull, who had lost only five of their 23 Super League meetings against Salford, hit back immediately, Seymour dummying over from close range despite a controversial obstruction in the build-up.

The Black and Whites were level after half an hour when McKinnon squeezed in at the corner before going ahead just before the interval when the lively Seymour crashed over for his second.

Salford rallied after the break, hitting back with a great move involving Luke Patten to send Ashurst crashing over to level the scores again.

The home side withstood Hull pressure before finally cracking 15 minutes from time when quick hands from Willie Manu and Kirk Yeaman sent in Tom Briscoe in at the corner, Danny Tickle booting his third conversion for a 22-16 lead.

But the Reds, who had Ryan Boyle making his first appearance of the season, hit back with Aussie duo Holdsworth and Patten engineering the space for Gleeson to power over.

Holdsworth added the conversion to set-up a tense finale, only for Richard Horne, on his 300th Super League appearance for Hull, to launch a drop-goal attempt five minutes from time.

But he failed and, with less than two minutes left, Hull hooker Danny Houghton was penalised and it was left to the ice-cool Holdsworth to land a 45-metre penalty.

"More disappointed in the way we played, we're a lot better than that and it's frustrating knowing that we didn't put our best performance tonight, the players are just as frustrated as I am.

"We prepared well, dressing room was good, the warm-up was good and the week's been good but they were just better than us. As I say we have a lot of work to do.

"I expected a bit more from the senior players but we are still learning about each other and what's required so as I said they as frustrated as what I am. We trained better, we prepared well it's just an uncharacteristic performance really, from what I have seen from the guys."