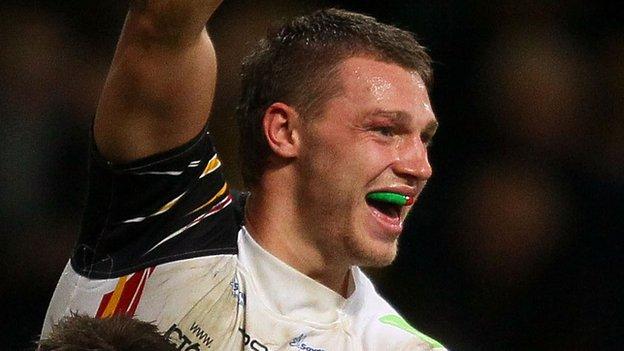 Elliott Whitehead ran in a hat-trick as Bradford Bulls bounced back well from last week's Wigan hammering by coming from behind to win at Wakefield.

But tries from Keith Lulia and Whitehead earned Bradford an important 12-10 half-time lead.

And Wakefield old boy Ben Jeffries sparked a blitz of four tries in 13 second-half minutes, Brett Kearney and Whitehead each grabbing two of them.

Ironically, the former Belle Vue half-back was only making his first appearance of the season for Bradford due to Luke Gale's ankle injury in last weekend's 54-16 drubbing by Wigan at Odsal.

Wakefield led three times, Steve Southern putting them back in front after Lulia had cancelled out Cockayne's early try. And they were also first to score at the start of the second half too, through Danny Kirmond. But, once they had gone behind for a third time, the Bulls did not let up.

Home full-back Richie Mathers pulled one back with 10 minutes left but, to exacerbate the home side's problems, they landed just one conversion, compared to Jarrod Sammut's six out of six for the Bulls.

Apart from Gale, the injury-hit Bulls were also without Australian centre Adrian Purtell, as well as forwards Ian Sibbit and James Donaldson.

But, in only his third game back from a five-match biting ban, 22-year-old second-rower Whitehead stole the headlines.

He grabbed an interception try just before half-time to edge the Bulls in front, completing his second treble for the club as they ran riot in the second half, twice latching onto kicks from Jeffries, Bradford's real hero.

The Australian half-back, now in his second spell at Bradford after two stints with Wakefield, caused havoc for the Wildcats defence with his tactical kicking.

There was also a stand-out performance from 18-year-old forward John Bateman, while Sammut displayed expert marksmanship with the boot as Bradford secured their second successive away win - to forget all about last weekend.

"I was pleased with the way we defended in the first half and, when we got a flow of possession in the second half, we came up with some points.

"I'm not saying the job's done. We got the two points and that's what we wanted.

"We had a tough week at training this week. We needed to build a bit of consistency in our performance and hopefully that will be the start of it."

"I thought there were some signs of it in the first half.

"I thought at half-time we could fix it up but some indiscipline crept into our play.

"Bradford came with a really simple game plan and they stuck to their guns better than we did over the 80 minutes.

"Our inability to deal with the kicks is obviously a little bit worrying."