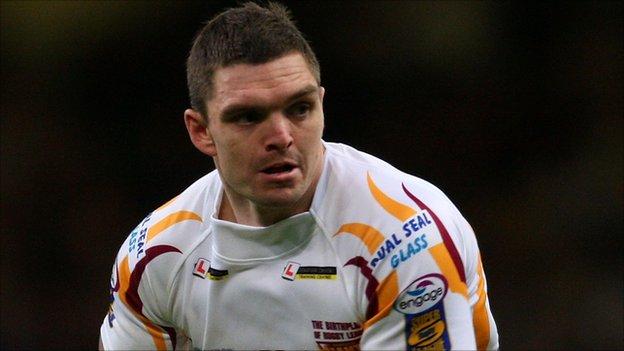 Huddersfield Giants returned to winning ways but were made to work hard in a bruising encounter with London Broncos at The Stoop.

The Broncos took the lead through Antonio Kaufusi, but tries from Leroy Cudjoe and Danny Brough, who kicked three goals, made it 14-6 at the break.

The two sides then exchanged tries - Kevin Brown and Joe Wardle for Giants, Kaufusi and O'Callaghan for Broncos.

However, Leroy Cudjoe's second of the game was enough to see off the hosts.

Nathan Brown's Giants side came into the game on the back of two wins and a haul of 19 tries in three games, while Rob Powell's Broncos were still looking for a first success of the campaign.

In front of a crowd of just 1,970, the home side made the brighter start, Tonga prop Kaufusi storming over from 10 metres out following good work by Jamie O'Callaghan and Craig Gower.

But the visitors responded when Brough intercepted a Broncos pass deep inside Giants territory and raced the length of the field to score in the corner.

Brown's side took the lead for the first time when Leroy Cudjoe danced through the Broncos defence after Kieran Dixon dropped the ball, Brough landing his second conversion.

Dixon was denied an equalising try when he gathered a high ball only to put a foot in touch on grounding, while Brough's penalty sent the visitors in 14-6 up at the break.

Huddersfield scored within their first second-half set, although there were complaints that Kevin Brown was offside when he pounced on Brough's kick to score.

Kaufusi offered hope of a comeback with a near carbon copy of his opening score, but Joe Wardle showed strength to force the ball down.

After Luke Dorn had a try ruled out for offside, Jamie O'Callaghan added some respectability to the scoreline when he took on Jermaine McGillvary on the outside before touching down.

But Cudjoe had the last word, claiming his sixth try of the season, the influential Brough kicking the goal.

"If Danny Brough had been playing for the opposition there is no doubt we would have lost that game.

"We were not at our best. Sometimes you need that bit of individual brilliance to get you over the line and Danny gave us that.

"There are going to be games like this and it is that extra talent that gets you the win."

"Physically, we were the stronger team, but we lacked that bit of polish.

"When you have yet to win a game confidence can be lacking and I thought we tried to force things a bit too much. We had three tries disallowed, and rightly so, but that shows how close this game was.

"At times, our play was a bit erratic and that let us down. But, if we keep performing like this, the wins will come."