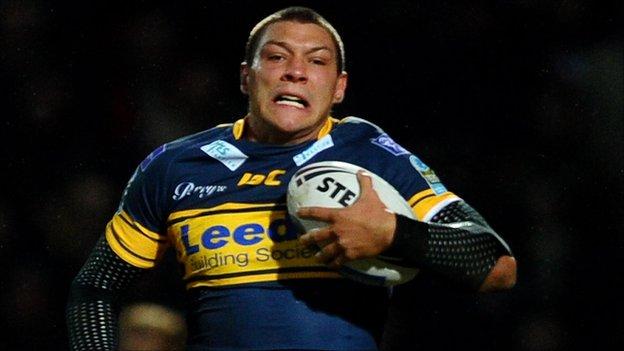 We scored some spectacular, freaky long-range tries with some individual brilliance from Rob Burrow, Danny McGuire and Kevin Sinfield

Widnes were full of intent early on, Hardaker being forced into defensive duty. But, having missed out on the opportunity to take the lead, the Vikings were blown away by a quickfire Leeds response.

Jones-Bishop set off the scoring when he finished off good work from Brent Webb and Danny McGuire before Burrow followed up with Leeds' second moments later after Hall's run.

Burrow was on the mark with his second moments later, but Widnes bounced back with a brace of their own.

First, Ah Van went over in the corner, set up by Hanbury, who scored himself as the Vikings narrowed the deficit.

A second try for Jones-Bishop capped the first-half scoring, and Leeds continued in a similar vein after the break when Hall ran in his first try, Webb providing the crucial lay-off.

Hardaker got on the scoresheet for the Rhinos after Paul McShane's long pass, before Widnes responded through Flynn.

Scores from Watkins and Hall added gloss to the scoreline on a satisfying afternoon for the newly-crowned world champions.

"It's a strange thing to say after conceding more than 40 points but we played some really good stuff.

"We are progressing and getting better. It is not an overnight process and the supporters saw we put in plenty of effort and endeavour.

"Leeds had some of the best players in the world on the pitch, like Ryan Hall and Danny McGuire, and they were too fast for us."

"If I was the Widnes coach I would be really pleased with the way they stuck at it.

"I spoke to Denis Betts after the final whistle and, without being condescending, told him they had a real dig.

"We scored some spectacular, freaky long-range tries with some individual brilliance from Rob Burrow, Danny McGuire and Kevin Sinfield."