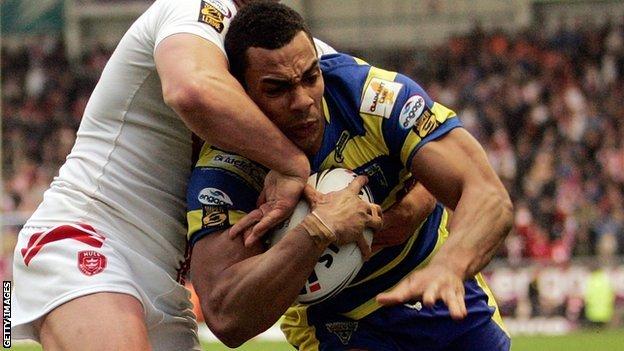 Warrington continued their unbeaten start to the season with a comfortable victory over Hull Kingston Rovers.

Chris Riley went over for Wolves early on before Chris Bridge extended their lead midway through the first half.

Ryan Atkins' try made it 18-0 at the break but Rhys Lovegrove and Craig Hall hauled the Robins back into the match after half-time.

In his first appearance of the season after injury, Aussie full-back Brett Hodgson kicked 14 points, landing all seven goals from seven attempts.

Warrington took the lead with 13 minutes on the clock when Richie Myler sent Riley over.

Wolves soon added to their score when fast and accurate passing along the line allowed Bridge to step inside the Robins defence to touch down.

The hosts looked to be cruising at the break after Myler's long pass found Atkins, who scored in the corner.

But Rovers fought back after the break when Lovegrove outpaced Atkins to score their opening try and the deficit was reduced to eight points when Hall raced clear to score under the posts.

Wolves soon ended the visitors' hopes of a comeback, however, as Riley latched onto Stefan Ratchford's long pass to score his second try before a quickfire double from Westwood and Atkins' second secured a more comfortable victory margin.

Warrington trio Bridge, Riley and Atkins have all now run in four tries in as many matches this season.

"In the first half our defence was unbelievable. To give them so much ball on our try line it was remarkable not to cave in. We had around 36 tackles in a row on our own line just before half-time and that shows a fair bit of commitment.

"I though Chris Riley had his strongest carrying game that I have seen. He broke through a lot of tackles and carried the ball really strong for a little bloke and he is growing into himself as a winger.

"And Ryan causes problems when he carries the ball like he did. He also came up with some really intelligent passes as well."

"I'm very disappointed with the last three tries that's for sure and obviously Brett Hodgson was on with his goalkicking.

"We fought back well to 18-10 and I thought we might just sneak home here but at the end there was some very inept defence which exacerbated the scoreline.

"It's fair to say we panicked when attacking their line and some players who probably should no better threw some passes that weren't on. We lacked the composure needed."