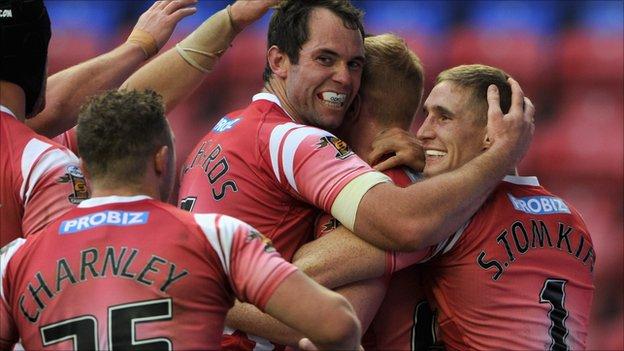 Sam Tomkins marked his 100th Wigan appearance with a hat-trick in a convincing win at Castleford.

Tomkins' treble, a brace each for Josh Charnley and Pat Richards, plus a score from skipper Sean O'Loughlin made it three wins from four for Shaun Wane.

Prolific winger Richards landed seven out of his eight kicks to contribute a personal 22-point haul.

Castleford, without head coach Ian Millward due to a family bereavement, managed one try through Josh Griffin.

The passing of Robbie Millward, the 19-year-old son of Ian, was marked by a minute's silence on an emotional day in West Yorkshire.

However, Wigan responded better to the occasion, O'Loughlin taking just three minutes to open the scoring, picking up on a loose ball and scampering through to touch down.

Tomkins than built on that lead when he collected the first of his treble, with a trademark jinking run after Castleford turned over possession.

Donlan's side reduced the defecit when Griffin, the league's joint top try-scorer with Charnley prior to the game, darted in for his sixth of the campaign following good build-up from Rangi Chase and Richard Owen.

But Wigan exerted their dominance co condemn Cas to a third successive defeat.

Richards finished off a move involving Brett Finch and Jack Hughes. And then, just before the break Tomkins was on the mark again with a wriggle to the line.

Tomkins racked up his hat-trick after a sweetly-struck kick by Michael McIlorum, before the England full-back turned provider to hand Richards his second try.

Flowing hands created an opening for Charnley to burst in at the corner before Tomkins created the opening for the winger's second.

Castleford were without centre Joe Arundel, ruled out after consulting a shoulder specialist, and Brett Ferres, who pulled out on the morning of the match.

"It has been a difficult week but we can't use that as an excuse for not carrying out things we had practised. I was disappointed with the performance and the players are a little bit frustrated.

"Wigan put us under a lot of pressure and every time we got the ball back it was within out 10 metres line. We had to go 100 metres nearly every set. We created some options on the edges but the final pass and execution wasn't great.

"Joe Arundel will not require an operation. He will probably two or three weeks of intensive rehab so the news is better than we expected."

"A lot of it is natural with Sam. He wants to win at everything, even when we play a game of Aussie touch in training. He's a great kid to have with us. He was outstanding, absolutely outstanding. No coach can take credit for what he does. He's just a competitor that works hard at his game.

"It was sad circumstances and my heart goes out to Ian Millward, but we just prepared to win the game the best way we could and we were here to do a job."