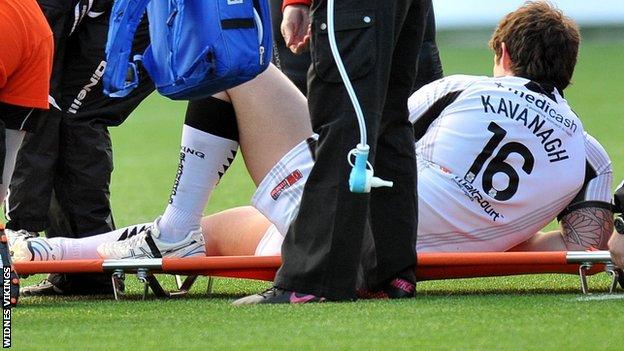 Widnes have pointed out that their new artificial pitch at the Stobart Stadium is not to blame for Ben Kavanagh's Achilles tendon rupture.

Kavanagh, who suffered the injury in Sunday's 38-18 home defeat by Salford, faces six months out.

And team-mate Anthony Watts has also been ruled out for six months after tearing knee ligaments on his debut.

But the club have stated that Kavanagh's injury "has no direct link to the performance of the pitch".

After criticism of the artificial pitch following the Vikings' opening weekend home defeat against Wakefield, four Salford players were allowed to play in tights at the Stobart Stadium on Sunday.

But the Widnes medical department stated that Kavanagh's injury "occurred in a recognised mechanism for that injury following rapid dorsi flexion and plantar flexion of the ankle when pushing off to sprint".

Widnes have also confirmed that Watts has torn his right anterior cruciate ligament and will be out of action for at least six months.

The 25-year-old Aussie pre-season capture was injured 10 minutes into the second half, having been introduced from the interchange bench midway through the first half.

The double blow for Widnes occurred on what was a freakish weekend for bad injuries in Super League.

The Vikings were already without Scott Moore, Hep Cahill and Simon Finnigan, all suspended for a breach of club discipline.

And Moore, their pre-season signing from St Helens, is understood to be suffering from a broken jaw.

Widnes are rooted to the foot of the table, along with London Broncos, having lost their first three matches since returning to Super League.

Their next test is at home to champions Leeds on Sunday (1400 GMT).