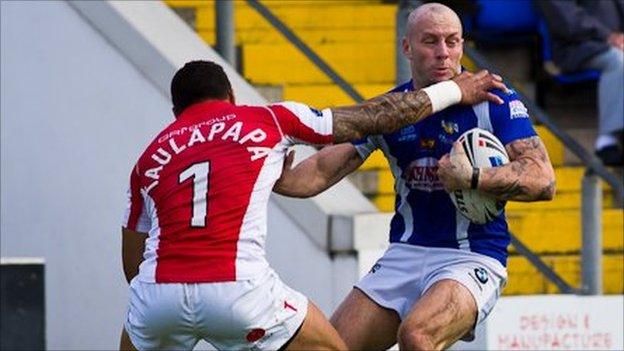 Barrow player-coach Darren Holt has said the 32-16 Northern Rail Cup win against Swinton ranks as his side's best display of the season so far.

"So far as a team performance goes this season, I thought it was superb," Holt told BBC Radio Cumbria.

"Our completion rates were up to 83% and if we can do that this season we'll be a force to be reckoned with."

Holt has also been impressed with the progress of Liam Harrison, who tied his future to the club in the summer.

The 29-year-old was switched from the three-quarters to the second-row following Holt's arrival at Craven Park.

"When I transferred Liam into the pack this year, I had some doubters and sceptics who said I should leave him in the centre," Holt added.

"But he's been playing out of position for the first five years of career, he shouldn't have been a centre, he should have been a second-row in my opinion.

"The squad and the team are reaping the benefit from having him in there and he is a key figure."