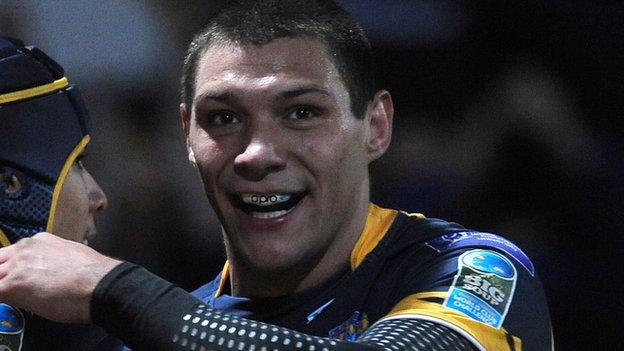 Ryan Hall claimed a hat-trick as Leeds eased to an ultimately comfortable 36-14 win at Castleford.

After trailing 18-0 inside half an hour, Cas closed the gap to four points with three tries from Daryl Clark, Kirk Dixon and Josh Griffin.

But the Rhinos stretched clear, Hall adding to his first-half brace to complete his treble.

Danny McGuire then got his customary try against Cas, backed by a late one for debutant Liam Hood.

Kallum Watkins was Leeds' other first-half try scorer as the world club champions made it three wins on the trot - admittedly with a flattering scoreline that paid little homage to the Tigers' battling efforts.

After Hall had spun his way over in the corner to give Leeds an early lead, Kevin Sinfield adding the extras with the first of six precise conversions, Cas thought they might level when Chase galloped in, only for the try to be chalked off due to a knock-on.

Instead, the next video verdict also failed to go Cas's way when Zak Hardaker's knock-on was overlooked and Hall was allowed to race in for his second try from 20 yards.

Leeds then further punished a by now disconsolate Cas when a handling error allowed Watkins the chance to sprint 80 yards and claim Leeds' third try.

I am sure Ian Millward was watching and he will have been proud of them. And the lads can be proud of their efforts

Cas looked down and out by the half hour, but two tries in the space of three minutes just before the break gave them real hope.

Stand-in coach Stuart Donlan's substitutions worked, Daryl Clark coming off the bench to sneak over next to the upright from dummy-half. And, after Kirk Dixon had added the extras, the Cas winger then twisted his way over to score himself, only to this time miss his kick.

From 18-0 down, that became 18-10 at half-time. And the gap was down to just four points within four minutes of the restart.

Hardaker spilled Brent Webb's pass, allowing Griffin to race almost the length of the pitch for his seventh try of the season - taking him level with Wigan's Josh Charnley once more.

But, after Dixon missed his second conversion of the night, Cas could not find another way through. And, after a series of near misses, Leeds finally made them pay when the home side got outnumbered and Hall stole in at the left corner to complete his treble.

Thr big winger's seventh hat-trick for the club made it seven tries in his last three games, triggered by his brace in the World Club Challenge against Manly before last weekend's big win at Widnes.

McGuire added another, his 22nd try in 18 bounty-filled career appearances against Cas, before 20-year-old hooker Hood came off the bench to complete the scoring just four minutes after entering the fray.

Donlan had attended the funeral of 19-year-old Robbie Millward earlier in the day with the rest of the Tigers backroom staff.

But, immensely proud of the spirit shown by his side just five days after a 46-4 home mauling by Wigan, he dedicated his side's stirring, but ultimately luckless performance to the memory of the late son of head coach Ian Millward.

"Although we didn't win, we're dedicating that performance and commitment to Robbie. I am sure Ian Millward was watching and he will have been proud of them. And the lads can be proud of their efforts.

"We felt we had a real dig tonight. A few key decisions in the second half and a couple of errors put us on the back foot and took a lot of energy out of us. At 18-14, we had a real good chance of coming away with a result. For 60 minutes we did the job really well. We just need to concentrate on doing it for the full 80.

"Ian's not ready to come back yet. He needs to spend a bit of time with his family and get stronger but he's determined to come back."

"Ryan Hall's not just getting on the end of things, he's been getting some difficult ball and still getting it down. He's quite an athlete. I don't have any qualms about saying he's a world-class winger.

"We created a fair few chances but didn't nail them and I tend to think that was more down to Castleford's defence. That's the history of Leeds travelling to Wheldon Road. They were always going to be up tonight.

"I'm pleased for Liam Hood. We were a little bit over-cautious about putting him on because the game was in the balance so he had very little game time."