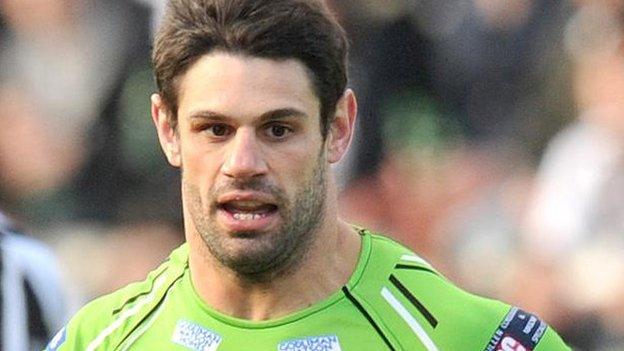 Salford ran in eight tries as they crushed London Broncos at Barton Bridge to earn their third Super League win on the trot.

The Reds had the game won by the break after four first-half tries from Chris Nero, Luke Adamson, man of the match Matty Smith and Iafeta Paleaaesina.

Sean Gleeson, with a brace, fit-again Joel Moon and a second try for Nero sent the Reds clear at 44-0.

But Broncos had the last word through David Howell and Antonio Kaufusi.

Michael Witt kicked both goals, but the Londoners are still looking for their first win of the season.

And they have now lost their last six matches against Salford, whose only disappointment was the size of the crowd, which was once again just over the 5,000-mark at their new Barton home.

The Broncos, whose last win was against Leeds Rhinos on 20 August, were without Tony Clubb, who suffered a dislocated jaw in last weekend's 30-16 home defeat by Huddersfield.

Shane Rodney, Karl Temata and Dan Sarginson were still out, but Julien Rinaldi returned after concussion.

And he marked his comeback with his first try for the club to set the Reds on the way to their biggest league win in 11 months.

"I am a happy coach with a smile on my face but it's the forwards who deserve the special praise. The Broncos are a big unit and we knew the first 20 minutes were important, but our forwards laid the platform.

"For the first 65 minutes I was over the moon with our defence and we created a lot of opportunities, played some nice footy and scored some fine tries. We also bombed a few chances but we are a hungry bunch and work hard for each other.

"Joel Moon turned in a great stint coming back from injury and Luke Patten had his best game for Salford.

"We need to dig a bit deeper. That's three away games this year we have been poor in the first half and need to do much better.

"I'm not just blaming the players, I need to do better too. We can't continue to bash our heads against the wall. We are training hard but need to have a look at why the boys are not getting energy in the first half.

"When it was 20-0 at half-time the match was pretty much gone. Our start has to be better. Our dressing room after the match was the quietest I have ever seen."