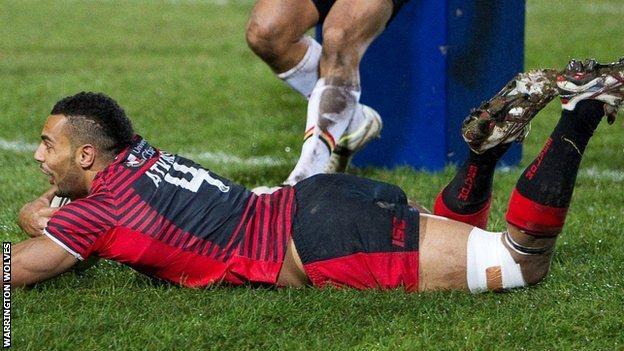 Ryan Atkins raced almost the length of the pitch for his 100th career try as leaders Warrington won at Bradford.

Stung by Matt Diskin's early try, Wire hit back to lead 10-6 at the break through Chris Riley and Mickey Higham.

But Atkins kept up his great Super League scoring record against the Bulls with his clinching 80-metre try.

After Trent Waterhouse got a fourth, Jason Crookes pulled one back, but Lee Briers had the last word with a drop goal, Chris Bridge landing three kicks.

England centre Atkins began his career at Bradford, although never playing a first team game for them.

But he clearly enjoys playing against them, having now run in 11 tries in his last six games against Bradford, all of which have ended up Warrington wins.

Ryan Atkins was terrific. He's getting better. He produced a great performance last week and backed it up with some big moments tonight

Wire clocked up 23 tries against the Bulls last season, winning 58-14 at Odsal in May before enjoying a 64-6 romp at the Halliwell Jones in July.

Bradford have lost all three home games so far, both their victories having come on their travels, but given the way they twice caved in against Warrington last season, there were genuine grounds for renewed play-off hopes this time round as they outplayed Warrington for long periods.

The leaders, along with Catalan Dragons one of only two teams still unbeaten in Super League XVII, are now three points clear ahead of Sunday's matches, Tony Smith's side now having won their last four since their opening weekend 20-20 draw at Hull.

On a wet night at Odsal, Warrington were without influential hooker Michael Monaghan and England second rower Ben Westwood, who picked up an injury in training - and they temporarily lost veteran stand-off Briers with an arm injury just 13 minutes in.

The night started badly when ex-Leeds hooker Diskin forced his way over from dummy half on the last tackle, Jarrod Sammut adding the two points for a 6-0 lead.

Briers almost made amends, jinking his way to the Bulls line, but was hurt in his attempt to ground the ball, Stefan Ratchford proving a natural replacement.

The Wolves levelled on 18 minutes when winger Chris Riley went in at the corner, taking advantage of a cut-out pass by full-back Brett Hodgson, who landed the conversion.

And Higham, making a lively first start for 12 months, dummied his way over to earn the visitors an interval lead.

Warrington had Briers back for the start of the second half but only at the expense of Hodgson, forcing Ratchford to go to full-back.

Bradford, who gave a debut to Tongan prop Manase Manuokafoa in the absence of Nick Scruton, who withdrew for personal reasons following the birth of his first child, continued to make a mockery of their previous form with neat build-up play.

But a promising move broke down when Sammut's kick was charged down, Atkins picking up the loose ball to gallop clear for a breakaway try, Bridge kicking his second conversion to earn a 10-point cushion.

And Wire made sure of victory when second rower Waterhouse stretched out to plant the ball on the line, winger Crookes scoring at the corner before Briers' late drop-goal.

Bridge, another former Bradford player, angered the home crowd by apparently using his elbow on a prone Ben Jeffries, only for referee Thiery Alibert to take no action other than to award a penalty.

"I'm not sure what went on there (Bridge's elbow on Jeffries). I'll leave that to the officials.

"I'm just disappointed for the home fans we haven't won yet. It was probably our best home performance. They had the biggest dig they could and, although we didn't come away with the points, the crowd probably appreciated what they saw.

"It's a game of inches. Warrington are a quality team. We weren't quite good enough but we weren't not too far away."

"Bradford were terrific. I thought they played their best game this season. But, with what was thrown at us by our opponents and a couple of injuries, the spirit of our boys was enormous.

"This team has been known for being able to score points but the character we showed was unbelievable. They made us work and my players are in there very proud of themselves.

"Ryan Atkins was terrific. He's getting better. He produced a great performance last week and backed it up with some big moments tonight."