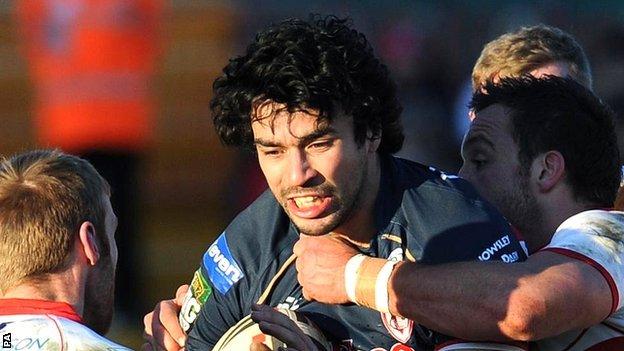 St Helens winger Ade Gardner says they must be more consistent if they are to challenge in Super League this season.

After opening with two wins, Saints were thjen held to a 36-36 draw at Hull KR before Friday night's last-gasp 32-34 home defeat by Catalan Dragons.

"It's been a problem," Gardner told BBC Radio Merseyside.

"We haven't played well for the full 80 minutes in games. We've played in fits and starts for 20 minutes here and 40 minutes there."

Saints were 26-8 up and apparently coasting against Catalans when they ran in their fourth try five minutes after the break, only to be hit by three French tries in just eight minutes.

They then finally lost to Scott Dureau's touchline conversion of a try scored after the final hooter had sounded.

"The result got away from the boys last week," said Gardnet. "But, for 60 minutes, I thought we were fantastic.

"It was probably up there with the best we played all season."

Now Royce Simmons' side, who have dropped to fifth, head for the Galpharm Stadium this Sunday to take on third-placed Huddersfield.

"That will be the challenge this weekend," said Gardner. "To put 80 minutes together.

"But we've been in situations like this before when we've struggled early season and we've had to make it up at the back end of the campaign.

"I don't think we're struggling. I just think we were beaten by a very good Catalans side.

"It was a few lapses in concentration more than anything. It's still early season and we're only four rounds into it and we can only build from here on in."