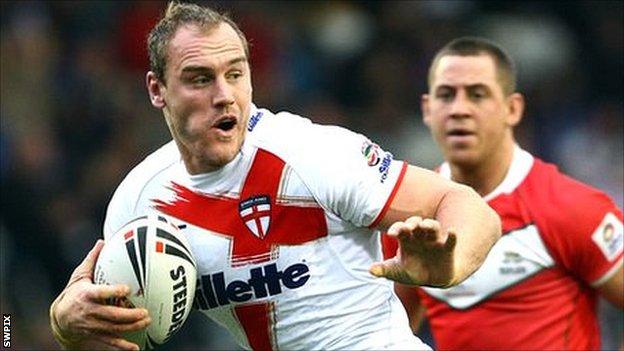 Leeds captain Kevin Sinfield believes that the Rhinos have a "good shout" of winning the race to re-sign Wests Tigers forward Gareth Ellis.

Ellis, 30, announced this week he will return to the Super League in 2013.

The England and Great Britain forward enjoyed a trophy-laden three-year spell at Headingley and Sinfield is hopeful that may encourage him to return.

"Knowing some of the guys like he does and wanting to live in the area we've a good shout," he told BBC Radio 5 live.

Ellis left the Rhinos and headed to Australia after the 24-16 Grand Final victory against St Helens in 2008.

He has won the Tigers' player of the year award in every year since he has been at the club.

The Sydney-based outfit have reluctantly agreed to allow Ellis to exercise a get-out clause in his contract to leave for family reasons as long as he does not head to another NRL side.

Competition for his signature is expected to be fierce, with Wigan and Warrington, whose coach Tony Smith worked alongside Ellis at Leeds, expected to be contenders too.

And Hull FC director of rugby Shaun McRae told BBC Radio Humberside on Wednesday "we'll be one of 14 clubs making an offer".

Sinfield reckons Ellis's good memories from his period with Leeds and the fact he still owns a home in Wetherby gives the Rhinos an advantage, even though he has previously stated he wished to finish his career with hometown club Castleford Tigers.

He said: "I think there's a good chance [Leeds could re-sign Ellis]. Gareth had a great time with us last time and we have all kept in touch with him.

"It'd be a fantastic fit, we'd love to have him back.

"I suppose there's going to be a lot of clubs trying to speak to him and trying to get him to sign a contract."