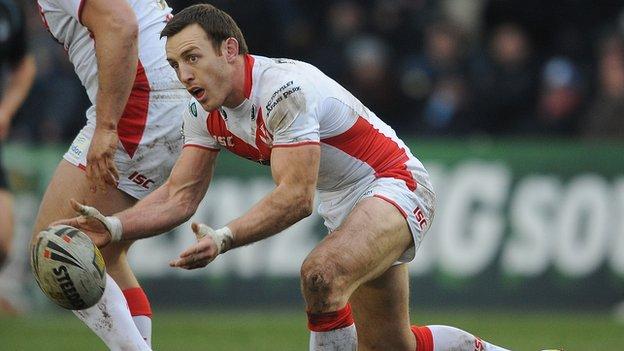 St Helens hooker James Roby faces several weeks out after being forced off with a leg injury in Sunday's 17-16 Super League defeat at Huddersfield.

"It's probably a few weeks. We'll get a scan but it doesn't look too good."

Simmons added: "You don't know until the scan comes back but he doesn't come off too easy so you're going to find some problems there."

Roby suffered the injury after 27 minutes at the Galpharm Stadium in a game that proved to be Saints' third without a win.

After falling in a heap, the 26-year-old 2007 Man of Steel attempted to play on. But, on his 241st appearance for Saints, he was forced to hobble off a couple of plays later, to be replaced by New Zealand international Lance Hohaia.

Roby, who has also won four Great Britain caps, made an impressive start to the season, scoring tries in Saints' first three matches.