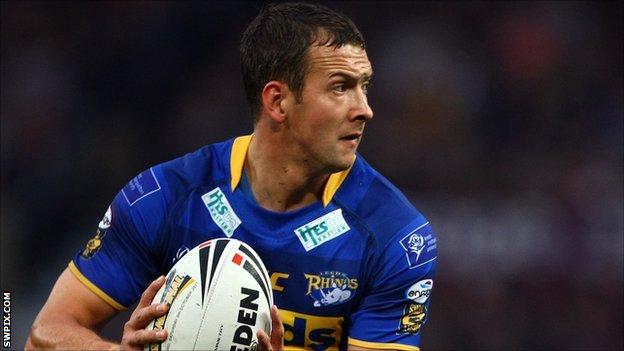 Danny McGuire's solo try and a Zak Hardaker effort rewarded early Leeds pressure, but Matty Blythe and Chris Hill scores made it 12-12 at the break.

Kevin Sinfield's penalty again put the Rhinos ahead, before Liam Hood again came off the bench to seal victory.

Much of the pre-match talk centred on the last occasion these two sides met in September, when Leeds sealed an unlikely Grand Final appearance with a Sinfield-inspired success back in September.

Despite the Rhinos adding the World Club Challenge to their Super League crown against Manly last month, Warrington's undefeated start to the Super League campaign meant that they just shaded the formbook going into the fixture.

Yet it was Brian McDermott's Leeds who made the early running, forcing a number of handling errors and making their dominance count when McGuire stepped his way across the line for his third try of the season.

Leeds doubled their advantage when swift hands moved the ball through Sinfield, McGuire, Ryan Bailey and Ryan Hall, who stepped back to find Hardaker whose momentum took him over on the sodden surface.

In response, Wire coach Tony Smith shuffled his pack, removing Paul Wood and sending on Hill, and his side responded on the half-hour when Lee Briers and Richie Myler combined to tee up Blythe.

They followed that up with an equalising try from Hill, following super sniping by hooker Micky Higham earlier in the set.

After the break, it was first blood to Leeds when Burrow's thrilling, scampering break gave the home side field position and, when the ball was worked from left to right, Kallum Watkins continued his free-scoring start to the season with a well-timed touchdown in the corner - his sixth so far.

However the lead last just a few minutes, Warrington captain Adrian Morley punishing his old club with a series of sapping drives at the Leeds line. And, with the defence scrambling, Briers' clever run and Westwood's momentum saw the latter crash over to level for a third time.

Sinfield then showed his nerve with a well-struck penalty to give Rhinos a narrow lead and, after both sides had tries chalked off, it was again the hosts who ran in a score.

McGuire's chip-kick had Wire half-back Myler turning and, when he failed to reach the ball, rookie hooker Hood scampered in for his second try in as many weeks - in only his second appearance.

"There's a long way to go yet but we're pleased with that. Some parts of that performance were very strong and some were very scratchy. It let's us know we're heading in the right direction.

"Some of the things we're practising in training are coming off. It puts a smile on our face but we're not punching the air yet. We didn't beat Warrington in the league last year and it was something we wanted to put right

"Both teams were a bit off with the ball but both were outstanding in defence. In the second half I thought we upped the ante and we needed to. I felt Jamie Peacock and Kylie Leuluai gave us a platform and Rob Burrow terrorised them all night."

"I thought we did OK in many areas. We probably didn't control the ball as much as we would have liked but we were good on our own tryline.

"It was fine-line stuff. The result could easily have gone the other way. We made them work hard for their points but they have attacking players that are dangerous.

"We had to expend a lot of energy early in the game and it counted against us later in the game."