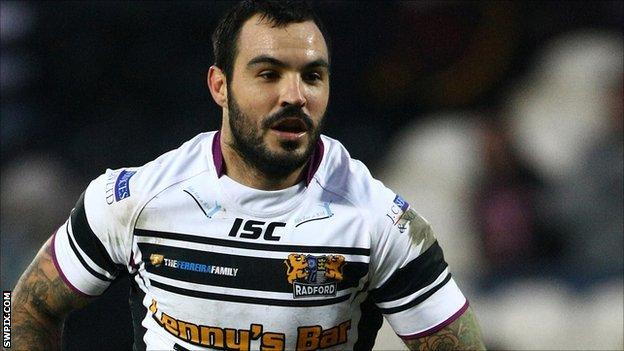 For Saints, Ade Gardner and Tony Puletua ran in tries, while Jamie Foster kicked one goal.

Despite a nervy opening for Royce Simmons' Saints, they made early chances through Jonny Lomax's probing, and prop Anthony Laffranchi was unfortunate to miss out when he failed to clutch the half-back's pass.

However, they did open the scoring when Barrow-born Gardner, who missed much of last season through injury, raced in after a move involving Lomax, Lance Hohaia and Michael Shenton.

That score settled some of the frustration around Saints' new home, but the optimism diminished when McKinnon notched the first of his two tries with a jinking run from full-back.

But, like his counterpart, Tickle was off target with the conversion.

After the break, it was again Saints who made the livelier start, and they were first to register a score when Puletua darted over, Foster successfully converting this time.

Yet Hull, coached by Simmons' Australian compatriot Peter Gentle, then stepped up a gear to take control.

First, the pacy Turner intercepted a Perry flick pass and galloped the length of the field to restore parity, and the Airlie Birds took the lead when Tickle notched his second goal of the night.

Tickle's accuracy with the boot - and Saints' indiscipline in giving him the opportunities to demonstrate it - further contributed to the home side's downfall, and McKinnon's second try was merely the icing on the Black and White cake.

"There was no communication out there whatsoever. We were lost and I am the coach and I did not know what we were doing at different stages. It was not what we planned to do.

"We played sideline to side, and never established any go forward to play off the back of. We chased the ball all over the park, it was all over the shop. That all comes back to communication. A couple of close losses in the last couple of weeks creates a bit of doubt - and the first thing that goes then is communication.

"We lost Kirk Yeaman early on and all the forwards had to play extended periods.

"We spoke at half time about having players out of position and everyone doing their job - it was a really gutsy win.

I'm still a bit critical of a kicking options but it's all still a work in progress."