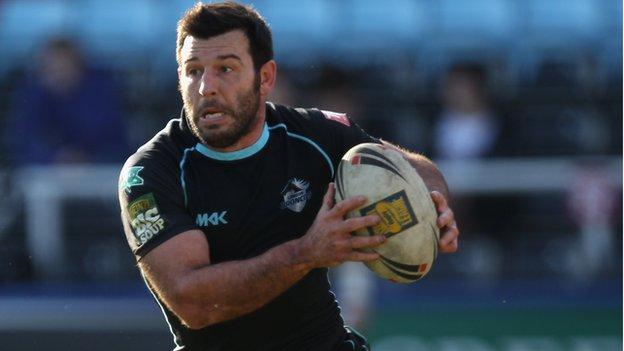 London Broncos recorded their first win of the season in the Super League basement battle against Castleford.

Broncos took the lead through David Howell and Chris Bailey but Cas hit back with Nick Youngquest and Kirk Dixon tries to draw them level.

Scores from Craig Gower and Matt Cook put the hosts in charge at the break.

The Broncos' victory at The Stoop leaves Widnes on their own at the bottom as as the only team in Super League XVII without a point.

"It has been a testing time for us and the confidence has been knocked. But, with players like Michael Witt and Craig Gower, we know we have the offensive flair.

"We have talked about what these guys are capable of and today they put it into practice. I thought Witt had a really good game. He has been struggling for confidence a bit but today he was the player we know he can be.

"Today was a massive win for us. We know we have been playing better than our record suggests but this gets us moving."

"We spoke all week about Witt and Gower and their abilities and they kept coming straight through us.

"We relied too much on Rangi Chase and it is tough on one man to carry a team like that.

"In the second half, too many of our players started to feel sorry for themselves. There are 13 men out there and they need to do their bit. We were poor at best today and we have a lot of work to do before we play again."