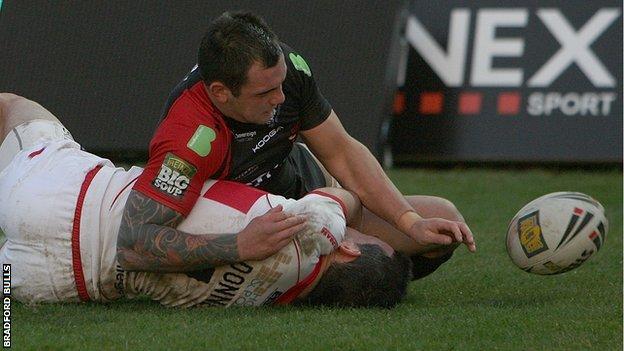 Tries from Mickey Paea and Kris Welham helped Rovers race clear before Crookes responded with the first of his tries.

Karl Pryce crossed to put the Bulls within two points but tries for Josh Hodgson and Craig Hall either side of half-time put the hosts in control.

Rovers made an explosive start, going 12-0 up inside six minutes after the effervescent Welham pounced on a chip through and then the destructive Paea crashed over, Dobson converting both goals.

The Bulls struggled to contain their hosts but a Kearney interception and 60-metre sprint was rounded off in style by Crookes following a sublime offload by Lulia.

Jarrod Sammut missed his shot at goal but the injury-hit Bulls regrouped. And they hit back when Pryce marked his first appearance of his second spell at the club by strolling over after Ben Jeffries' inch-perfect kick had the Robins defence bamboozled.

Mick Potter's injury woes increased further when prop Nick Scruton came off with a shoulder injury on 30 minutes. And it got worse on the stroke of half-time when Dobson sidestepped four players, fending and offloading in the tackle for Hodgson to score Rovers' third try.

We played some good footie in the second half. It was fantastic for the fans and pleasing for the coaching staff

Dobson slotted the goal to give Rovers a 10-point half-time lead and Hall's try early in the second half, along with Dobson's fourth straight conversion, made it 24-8 to the Robins.

But Crookes began the stunning revival when he dived low from a quick play-the-ball for his second and Sammut's extras brought the Bulls back to within 10 points again.

The Bulls winger then turned provider when he produced an inspired kick off his line for Diskin to gather and ground, Sammut again proving on song from the tee.

Bradford levelled when Elliott Whitehead rounded an injured Welham to break and feed inside to Kearney, who caught and stepped in one move to race in under the posts. And Sammut's conversion put the Bulls in front for the first time, 26-24.

Chev Walker had a try disallowed inside the final 10 minutes when Rhys Lovegrove was penalised for playing the man from the play-the-ball and was denied again by a gang tackle on the line.

But, by now, the Bulls were attacking in waves, Crookes claiming his hat-trick as he gathered with his fingertips at full stretch before touching down in the corner with inches to spare.

Pryce broke away down the right in the final minute, only to be hauled down, but the ball was sent wide for Lulia to claim a deserved match-sealing seventh try.

"It's very disappointing as I thought we started exceptionally well.

"That is what happens when you make errors. You get penalised for it.

"For one of their tries, unfortunately, Kris Welham had a good chance to catch it and dropped it."

"The second half could have gone one of two ways. The guys responded the way I wanted them to and the way the players wanted to.

"We played some good footie in the second half. It was fantastic for the fans and pleasing for the coaching staff.

"We came up with some flamboyant plays and we got a bit of space which is something we've not been used to this season."