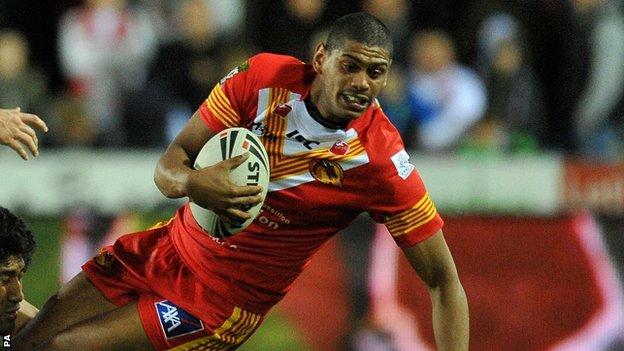 Catalan Dragons ran in eight tries in Perpignan as they ended Salford's run of three Super League wins with ease.

The Reds went ahead through Stuart Howarth but two tries by Damian Blanch and one from Scott Dureau, who kicked four goals, saw the hosts pull clear.

Thomas Bosc's try put the Dragons firmly in control before Leon Pryce dabbed down on the stroke of half-time.

Duport added two more either side of tries from Josh Veivers and Gareth Cook scores before Daryl Millard went over.

Salford, in pursuit of their fourth successive Super League win (and their best run since 1997), drew first blood when Howarth gathered Luke Patten's kick as it rebounded off the post protector, Daniel Holdsworth converting.

The Dragons, looking to bounce back from last week's defeat by Wigan, struck back two minutes later through Blanch after Duport's superb offload.

Moments later scrum-half Dureau crossed, converting his own score before rapid-fire tries by Blanch and Bosc made it 20-6 to the hosts on the half hour.

The home side tightened their grip on the stroke of half-time when Pryce stepped and ducked his way to a first try in Catalan colours.

Dureau was again on song from the kicking tee, allowing the Dragons to head for the tunnel with a 20-point advantage.

Duport scored his first try on 53 minutes to further increase the hosts' control before tries from debutant Veivers and Owen gave Salford hope of a comeback.

But Duport went over again to kill off their opponents' revival and Millard rounded off another good afternoon for the home side.

The French side's fourth win in five matches lifts them to fifth in Super League.

"In the first half we were very clinical. We made some errors in the second half and had some indiscipline in defence that allowed Salford back into the game but we defended our line really, really well and I think we can gain some confidence from that."

"I've talked about our depth of squad this year and I don't want to see a difference whoever is in the side. The boys who came in today did a great job.

"We spoke in the week about trying to take the momentum away from them and slow down their tempo, but we weren't able to do it today. If you look at the two teams on the whole we probably weren't at the races, and across the board they probably were.

"At 6-0, I thought we were well in it and, in the first 10 or 15 minutes, we caused them some problems with some offloads and our passing and put them under pressure.

"I'm not making any excuses but, at the end of the day, we had a full-back on one wing and a centre on the other. We made some poor decisions on the edges today. Three of their tries came from our wingers wedging when the play was covered, so if you turn those 18 points around then it makes the scoreline look a lot closer."