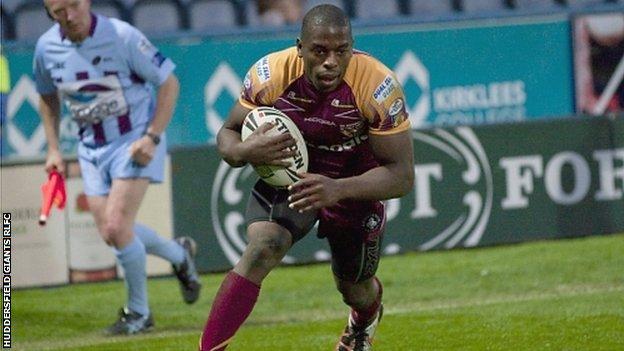 Jermaine McGillvary crossed twice early on for the Giants before Ben Cockayne replied for the hosts.

Cockayne struck twice more after the break but Joe Wardle added a brace of his own either side of Kevin Brown's try to seal a fifth win in six games.

The Giants' victory, combined with Wigan's shock loss to Widnes and Warrington's Friday night defeat by Leeds, means that the Giants leapfrog their two rivals to the head of the table.

McGillvary's opening try was forged by Brough, one of four former Wildcats in the Giants' ranks, who created space for Leroy Cudjoe to feed his winger the crucial pass.

The centre then drew two defenders to set up McGillvary's second as the visitors raced into an early lead.

Aaron Murphy had his try disallowed for a forward pass before a series of four penalties against the Giants ended in the first try of Cockayne's hat-trick.

Patrick took his scoring pass off the shoulder of David Faiumu after Scott Grix's good work and Brough's penalty just before half-time made it 18-4.

But poor Huddersfield discipline lead to a revival among the hosts and Cockayne held two long passes from Isaac John to claim his hat-trick, with the stand-off taking over kicking duties for the third to glean Wakefield's only extras.

Now just four points ahead the Giants skipper Brown took control and sent Wardle through a gap to score on the hour and then cut through himself seven minutes later.

Brough pounced on a loose ball to set up Wardle for his second as the Super League leaders finished the match as strongly as they had started it.

"We don't want to get carried away. It's a long year. We don't need to go table-watching, we need to learn the lessons from what we didn't do so well today.

"In the first half we were really good. We'd done all the hard work into the wind and to come in at 18-4 was pleasing.

"With a big breeze and Danny Brough in our side, we should have really finished it off early in the second half but our discipline was disgraceful.

"We kept inviting them into the contest and they accepted the challenge."

"We felt we pushed them. We thought when we were getting close, there were a couple of big swings in the game.

"Huddersfield don't give you an awful lot but today I thought they gave us an opportunity and a chance.

"There was a period in the second half when we had the momentum and we looked like we could take it.

"I'm really encouraged by lots of aspects of our performance. We let in a couple of soft tries that were avoidable and, when Huddersfield had to defend their tryline, they probably did it better than we did.

"We're learning about each other all the time and I don't think we're far away. I think our performances show we'll get some wins."