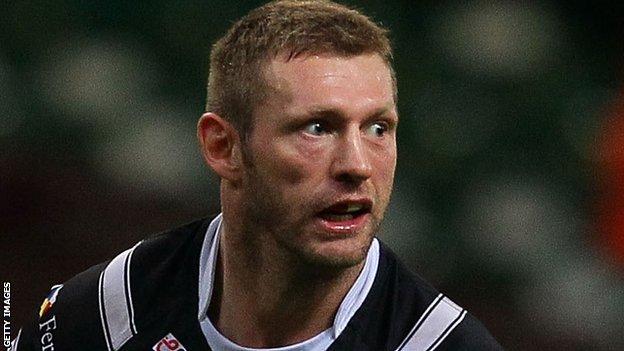 Salford City Reds assistant coach Sean Long has spoken of his gratitude at being able to remain in rugby league.

After retiring at Hull last season, the 35-year-old joined the Reds in August.

"It nearly killed me," Long told BBC Radio Manchester. "Luckily, I was still involved in the game and that is the opportunity Salford gave me.

"If I had to take a step back and finish all together it would have done me in big style, but I've finally just now got to grips with not playing."

After losing their opening two games of the season, Salford have now won three in a row for the first time in six years in Super League, and sit fifth going into this weekend's round of fixtures.

"I'm getting a massive buzz out of coaching and being part of the lads and going out there and giving them instructions to do," said the former Great Britain half-back.

"And, when it comes off, I get a massive buzz out of that, now more so than I did when I was playing.

"I run the attack. I do the video for Salford, look at how, say, Wigan are defending, how we can crack them and I put a game plan together.

"I've got some really intelligent players in my team, Matty Smith and Daniel Holdsworth, players like that who go out and carry out whatever I say onto the field, and it's making my job a lot easier.

"We're all getting on the same page at the moment so it's pretty good."