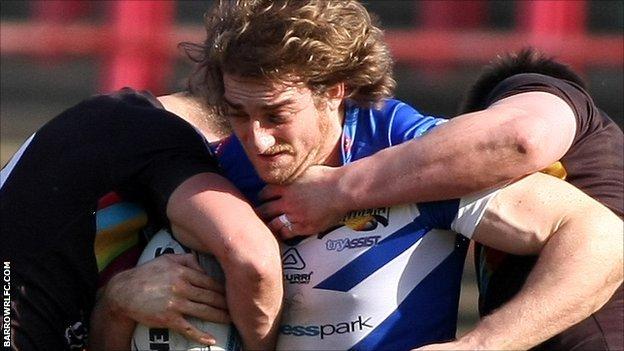 Barrow Raiders player-coach Darren Holt has admitted his side were given a surprise by North Wales Crusaders in Sunday's Championship One opener.

Raiders were 20-4 down at half-time but rallied in the second half to record a 26-24 win at Wrexham with three-quarter Chris Larkin scoring a brace.

"We thought we would be ready for anything they threw at us but we weren't up to the mark."

Holt added: "If that's a sign of things to come then I don't think I'll have any hair left come the end of the season."

"The positive side and the bonus for us is the character we showed second half to dig deep and come back."

The first 40 minutes were a disappointment for the Australian and his players as they trailed 30-6 at the break.

Despite a second-half comeback, including a try for goalkicker Carl Rudd, Haven were beaten 48-16 at the finish to post just one win in five.

"I'm getting tired of playing a second half of good footy but not a good first half," Gailer said.

"Whenever we make a mistake we seem to get six points put on us."

Up the coast at Workington, an opening day success looked likely when Town led Oldham 10-6 at half-time thanks to first-half scores from Dan Rooney and Jason Mossop.

However three converted tries to one in the second period were enough to secure an away win for Oldham at Derwent Park.

"We've got to take a lot of responsibility ourselves, but other circumstances came into play today," joint-coach Gary Charlton said.

"What can you do when you're penalised nearly every set of six?

"We'll be making enquiries. There are two teams out there and I don't think we got a fair crack of the whip.

"But we're not good enough to let teams back into the game."