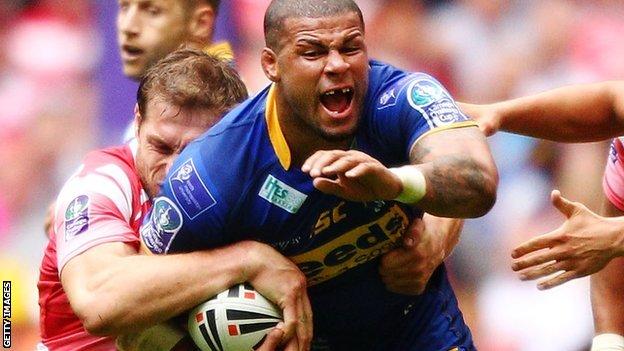 Leeds prop forward Ryan Bailey has been given a three-match ban for making deliberate contact with a referee.

Bailey, 28, was penalised for pushing official Richard Silverwood during Rhinos' 26-18 victory over Warrington.

He pleaded guilty to the Grade C offence and received a £300 fine after appearing in front of the Rugby Football League disciplinary committee.

Warrington hooker Micky Higham will miss two matches after a high tackle on Leeds' Rob Burrow in the same game.

Leeds' Brent Webb was also in front of the discliplinary committee and was fined £300 but avoided a ban after pleading guilty to another charge of making deliberate contact with a referee.

Sammut was charged with illegal use of his forearm/elbow on home centre Craig Hall in the Bulls' 36-24 win at Hull Kingston Rovers.

O'Meley was charged with making dangerous contact on Tony Puletua in the Black and Whites' 22-10 win at St Helens.

All five players were charged after the incidents were viewed by the Super League Match Review Panel, which also issued a formal caution to Josh Charnley of Wigan Warriors over his use of the forearm while in possession.

Bailey's punishment is the maximum penalty for a Grade C offence and came after he pushed Silverwood out of the way in the build-up to the visitors' second try.

"We are proud in our sport for the respect we have for the officials in rugby league and this case has been rightly dealt with.

"Common sense has prevailed in the case of Brent Webb. While he was found guilty, the panel accepted there was no cynical intention on Brent's part."

Higham was also given a £300 fine and will be unavailable for Wolves' clashes with Wakefield Trinity Wildcats and Wigan Warriors after being found guilty of a Grade B offence following the high tackle on Leeds' Burrow.