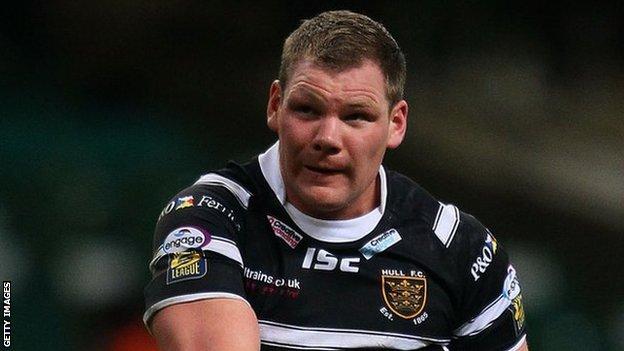 Tickle ran in a first-half hat-trick, bolstered by tries from Willie Manu and Andy Lynch, as Widnes were brought back down to earth after beating Wigan.

Richard Whiting and Sam Moa scored too after Manu had added his second try.

Tickle powered over for his fourth and Tom Briscoe grabbed another before two late Paddy Flynn consolation tries.

Widnes have conceded 310 points in seven games - 72 more than London Broncos, who have the second-worst points-against record

It was Hull's biggest victory of the season, suggesting that a top-four spot under new coach Peter Gentle might be a realistic target.

The Black and Whites were ruthless from the start, cruising into a 12-point lead after tries from Tickle and Manu.

When Lynch added a third, Hull were in a powerful position already, without needing to exert themselves unduly.

With the cushion of a big lead, Gentle's team could afford to play a more expansive game and Brett Seymour alertly picked out Tickle, who poached his second try.

Tickle's hat-trick was then completed soon afterwards as he sliced through the weak Widnes defence.

It became a question of just how many points Hull were going to score and they showed an appetite for more.

Manu collected a Danny Houghton pass for his second, then Whiting and Moa added to the visitors' misery.

Both Briscoes were on the pitch to see him do it, Shaun playing at full-back for Widnes, while winger Tom rounded off Hull's scoring by finishing off a break under the posts, Tickle making it nine conversions out of 10.

It could have been even worse for Widnes, as there were then still 20 minutes remaining, but Hull were kept out before Flynn's two late tries offered the visitors scant consolation.

"Danny is in a very good run of form at the moment. He's a smart player, he mixes his game up and it is hard for opposition defences to get a read on what he is going to do.

"I think our pack are really complimenting each other and are sharing the workload.

"Andy Lynch played another 70 minutes for us, Willie Manu and Danny Tickle were a handful on the edges and Danny Houghton played the full 80 minutes."

"It is strange because you know it is there, but the group are not ready to hit those heights each week.

"Attack-wise we never looked like scoring and, while we sneaked two tries at the end, that flattered us. To have 58 points scored against you, that is unacceptable.

"I thought Danny Tickle was just fantastic today - as was Danny Houghton - and they just ripped us to pieces out there."