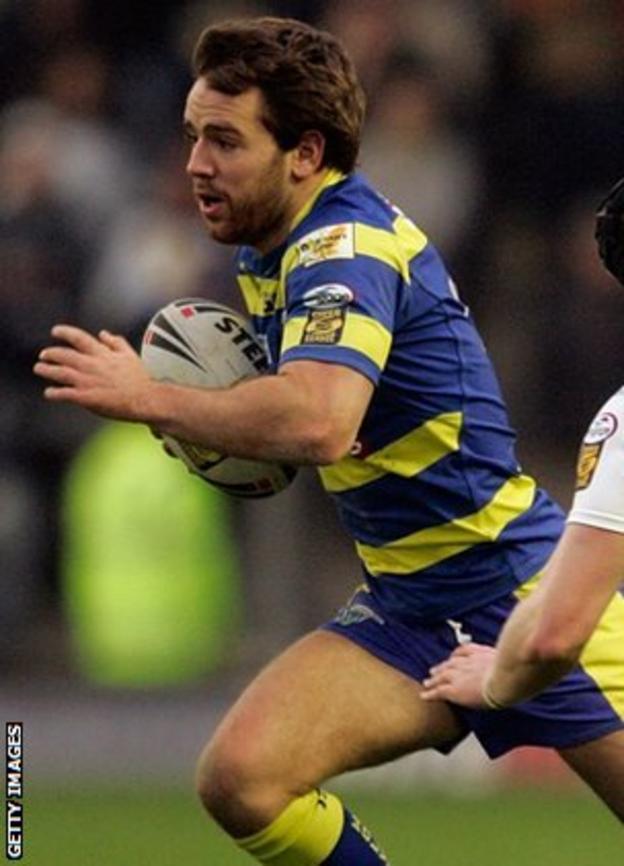 Warrington bounced back from their first Super League defeat of 2012 to maintain their unbeaten home record.

Richie Myler ensured it was 20-12 at half-time and crossed after the break.

After turning in a battling performance, the Wildcats would have gone away with a draw had John been successful with his kick six minutes from time.

After losing at champions Leeds last time out, Warrington against found themselves struggling against West Yorkshire opposition when Michael Monaghan's poor pass allowed Wakefield to press, John slipping Myler's tackle for Danny Washbrook to stroll over for the first try.

John landed the conversion but Warrington levelled on the back of three successive penalties, Trent Waterhouse charging through John, Peter Fox and Danny Kirmond to give Atkins a walk-in try against his old club, Lee Briers adding the goal.

Kyle Wood then robbed Atkins of possession to sending John over for a 12-6 Wakefield lead after 24 minutes.

It became worse for Warrington when ex-Wolves full-back Mathers dummied his way over, John adding his third conversion, before Myler's try from Ben Cooper's smart pass cut the gap to 18-12.

Wakefield stretched the interval lead to 20-12 with a John penalty when Paul Wood was sin-binned for a high tackle on Paul Johnson.

Warrington overcame the handicap of being down to 12 men for Myler to take another Cooper pass to race clear for his second try almost straight from the restart but Briers missed the kick.

The Wolves' joy was short-lived, Ali Lauitiiti charging over for Wakefield, John maintaining his 100% record with the boot to extend the visitiors' lead to 26-16.

But Briers set up Ben Westwood to reduce the arrears to 26-22 and Warrington went ahead for the first time on the hour when Myler's kick rebounded off a defender for Grix to touch down, Briers adding the goal to make it 28-26.

Joel Monaghan scored in the corner after 66 minutes to extend the lead to 32-26 but Wakefield refused to concede defeat.

Chris Riley failed to collect a kick for Mellars to cross in the corner, John narrowly falling short with the conversion attempt.

"Wakefield were terrific and outenthused us. They will no doubt feel a bit aggrieved although I thought we deserved to win.

"They have had a big turnaround of players and coaches and played with plenty of spirit.

"We had to work too hard and are making it tough on ourselves. We are making a lot of mistakes early on and the unforced stuff is affecting us. We have been doing it for a few weeks and need to change it."

"The most disappointing thing was Simon Grix's try on the seventh tackle. That was a bitter pill to swallow.

"We lost Danny Kirmond with a nasty facial cut and a bit of concussion and had to shuffle round a bit.

"Warrington are a very good side but this was a great performance by us. And it would have been hard for Smithy to argue if we had got a draw."