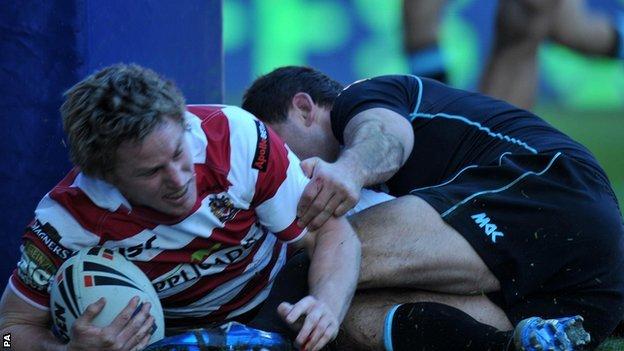 Wigan Warriors came from behind to get back to winning ways and claim a hard-fought victory against London Broncos.

Despite reverting to full strength after their weakened team's shock 37-36 defeat at Widnes last weekend, Wigan made a sluggish start.

The Broncos took a fourth-minute lead when David Howell was held up only for Witt to cross on the right.

Chris Bailey then knocked on in front of the posts for the Broncos and, after a powerful run by Goulding down the right, Wigan levelled on 10 minutes when Finch charged onto Thomas Leuluai's pass to score next to the posts.

London backed up Matt Cook's break for Luke Dorn to send Robertson over in the left corner.

Witt then forced Richards to concede a goal-line drop-out and Dorn swept the ball left to Sarginson, who stepped inside to touch down.

Wigan hit straight back in the 31st minute, Finch offloading to Jeff Lima before Hock reached over.

Tomkins and Lima then helped set up Goulding, who scored on the right after arcing his run.

And, when Tomkins broke from inside the Wigan half in the 37th minute, finding Finch in support, skipper Sean O'Loughlin made the final pass for Carmont to cross.

The Warriors picked up from where they left off when Richards scored from Hock's offload within two minutes of the restart.

But ex-Wigan man Melling backed up Craig Gower's break to swiftly pull a try back for the Broncos.

Finch then wriggled through for his second try in the 55th minute before Tomkins caught the London line napping by playing a tap penalty and bursting through to score an excellent 80-metre try.

Leuluai almost added his name to the scoresheet but lost his grip reaching for the line, and Witt, who also kicked five goals, scored his second try after Leuluai's late pass was intercepted.

"London Broncos did a good job but I'm disappointed with the tries we let in. We've a lot to work on.

"We scored some good tries but 30 points is unacceptable. I don't mean any disrespect to the Broncos, but we have high standards here.

"There were some poor defensive reads, some one-on-one misses, things we can be better at, but we'll fix up for Warrington."

"We scored 42 points last week and 30 today so we're getting better offensively.

"Last week has given the players some confidence to play with the ball and it's pleasing to come to somewhere like Wigan and score 30 points.

"But, if you score 30 points, especially away from home, you need to back it up in defence. It's disappointing we weren't stronger defensively at crucial parts in the game."