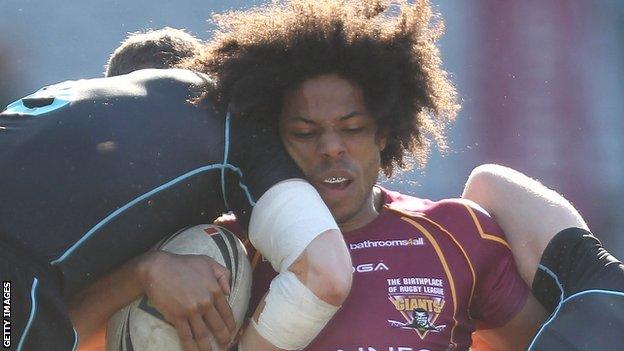 Luke George scored his third hat-trick of the season as Nathan Brown's Huddersfield thrashed Castleford to stay clear at the top of Super League.

Tries from George, Greg Eden and Joe Wardle gave the hosts a 14-point lead, before Nick Youngquest closed the gap.

Larne Patrick and George's second put Huddersfield 26-4 ahead at half-time.

George completed his treble after the break, Kevin Brown and Michael Lawrence also went over, and there were 10 points from the boot of Danny Brough.

It was a disappointing return for Castleford boss Ian Millward following his month's compassionate leave as he failed to end his side's losing run - now six matches on the trot.

Millward made five changes from the team that lost 42-16 at London Broncos last weekend, giving a debut to 20-year-old winger James Clare.

George set the scoreboard ticking over when he was released by Lawrence and regathered his own kick to score his first try.

That was the signal for Millward to makes his first four changes - and they initially had the desired effect as the Tigers, with Rangi Chase pulling the strings, scored in the corner through Nick Youngquest.

Jason Chan was sin-binned on 32 minutes for a dangerous tackle on Youngquest but the home side played even better with 12 men, extending their lead to 22 points by the break.

Replacement prop Larne Patrick went over before George grabbed his second after racing onto a precision kick from Kevin Brown.

With the hosts still a man short, George scored his third within a minute of the restart to go level with Wigan's Josh Charnley on nine tries as Super League's top scorer.

He then turned provider to set up Brown before Lawrence forced his way over for Huddersfield's eighth try.

After failing with his first two conversion attempts, Brough eventually found his accuracy to finish with five from eight attempts.

"I've got to take my hat off to Huddersfield. Against most teams we could come up with errors like that and stay in the game. I am impressed with the way they attack.

"I like the way Nathan Brown plays with three ball players. They come at you with a lot of options. I thought they looked really sharp tonight.

"They were really at the cutting edge, and they play the style of play I like to see. There is no reason why they can't win the league and it would be good for the competition."

"It was a scrappy game. The key is the amount of opportunities we missed. Our approach to the game at the beginning wasn't great.

"We were thinking points rather than pressure and that could hurt us if we keep that mentality further down the line.

"We need to address one or two little areas. We have to do the tough things before the glamorous things happen."