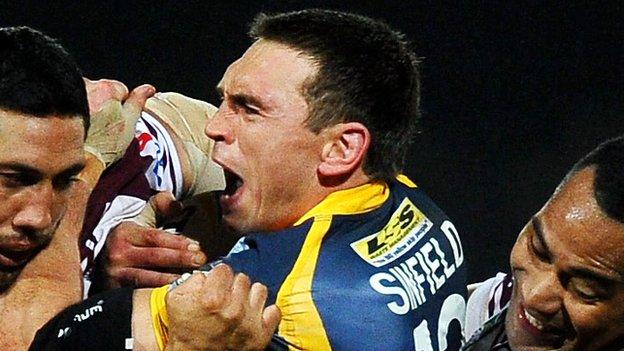 Sinfield scored a try and kicked eight goals from 10 attempts to pass Lewis Jones' tally of 2,920.

Vinnie Anderson, Gareth Owen and Luke Patten scored tries for the hosts, but Leeds won for the fourth game in a row.

Salford, who have never won a home Super League match with Leeds, began promisingly, the returning Anderson putting them ahead with his first try of the season.

Leeds hit back when Chris Clarkson raced onto Sinfield's well-timed pass for Hardaker to finish off smartly and Webb sent Delaney over, Sinfield obliging with the conversion on both occasions.

Watkins went round Stuart Howarth with ease to extend the lead to 18-4 before Sinfield scored his first try of the season.

Leeds added a sixth try when Carl Ablett gathered McGuire's kick for Hood, a debutant just two weeks ago, to notch his third try in as many three sub appearances.

Sinfield and Watkins then combined for McGuire to cross in the corner to give the hosts a 32-4 lead at the break.

Hardaker scored twice after the break - his first a solo run and his second from smart inter-passing with Ablett and Brent Webb.

Burrow notched the visitors' ninth try and Ablett then turned try-scorer himself, Sinfield taking his tally by the end of the evening to 2,925 points for Leeds.

Owen and Patten then both went over late on for the hosts in front of a crowd of 6,891 - the biggest crowd at their new stadium.

"They blew us away in the first half and it was all over at half-time.

"They got us down the short side a couple of times and missing individual contact in the tackle cost us dearly.

"We were a busted outfit in the second half."

"I thought it would be tough and did not think I would get close tonight, but I am delighted to do it. I was a bit worried I may not score a try all season.

"I did not know how many points Lewis Jones had got when I started kicking, but it is more pleasing the way we played than beating the record.

"I have played in some amazing teams and have been lucky that most of the tries have been under the posts."