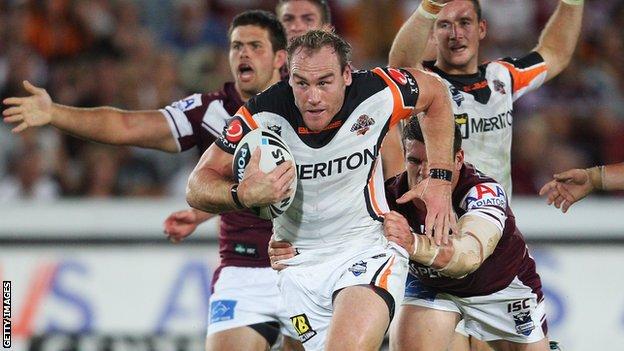 England international Gareth Ellis will decide which Super League club to join by the end of March.

The Wests Tigers forward is in demand after announcing that he is leaving Australia at the end of the season.

His agent David Howes said that almost all the 14 Super League clubs have expressed an interest in signing the 30-year-old second row.

"We're firming up the definite offers. Gareth wants to make a decision this month," Howes said.

Ellis' last game for a Super League club was Leeds' 24-16 Grand Final victory against St Helens in 2008. He joined the West Tigers in 2009 on a three-year deal.

"He wants to put it to one side and concentrate on finishing on a high with Wests Tigers."

The former Wakefield and Leeds star, who has won the Tigers player-of-the-year award in each of his three seasons so far, wants to return to Britain for family reasons.

Ellis is from Castleford and still owns a house in Wetherby, so is likely to sign for a club from his home county of Yorkshire.

Hull, coached by ex-Wests Tigers assistant Peter Gentle, and Ellis' last British club Leeds, are the frontrunners to win the race for his signature, although Huddersfield are also in the running.

In the past, Ellis has said that he would like to end his career at his home town team of Castleford Tigers. Ellis was a junior at amateur side Castleford Lock Lane before joining Wakefield in 1999.

He made his Super League debut that year and moved to Leeds in 2005, where he made more than 100 appearances.