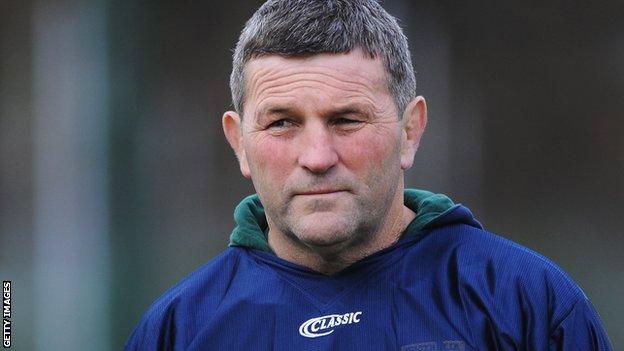 Head of high performance Mike Rush has taken temporary charge, with Keiron Cunningham taking over as assistant coach from Kieron Purtill, who has also parted company with the club.

It is extremely rare for a big rugby league club to sack a coach so early in a season and effectively seven games after reaching a Grand Final. But, with upcoming games against Leeds, Warrington and Wigan, chairman Eamon McManus has weighed up their worst-ever start to a Super League season against growing fan frustration and player disillusionment and decided to pull the trigger

But Huddersfield have issued a "hands-off" warning over coach Nathan Brown.

Simmons' fellow Australian Brown, whose Giants side earned a 17-16 win over Saints just a fortnight ago, has been installed as the bookmakers' favourite, with only six months to go on his existing contract at the Galpharm Stadium.

But Brown said: "I have seen all the speculation and I am going nowhere. I have a job here until the end of this season and that's that for me.

"This group of players and the club are very special to me and I will leave here at the end of October having given my absolute best to try and achieve the goals we have set ourselves. What the situation is at any other club is not for me to comment upon."

After arriving in England early in 2011 on a two-year deal, following Potter's end-of-season departure, the former Australia international hooker guided Saints to a Challenge Cup semi-final - which they lost to local rivals Wigan - and third place in Super League.

But they then twice beat Wigan in the play-offs to reach Old Trafford, where they lost 32-16 to Leeds, who they face again this Sunday at Langtree Park.

But, after starting this season with successive wins against London Broncos and Salford, Saints needed a last-minute Jamie Foster penalty to rescue a point in a 36-36 draw at Hull KR. And, triggered by the stunning last-minute defeat at home to Catalan Dragons the following week, they have now lost four games on the trot.

"We've had a difficult start," said chairman Eamonn McManus. "And it's best to make change sooner rather than later.

"We have every faith in Mike Rush and Keiron Cunningham. They each know the club inside out.

"I would like to go on record to pay genuine tribute to Royce Simmons. He is a fantastic person, of absolute integrity."