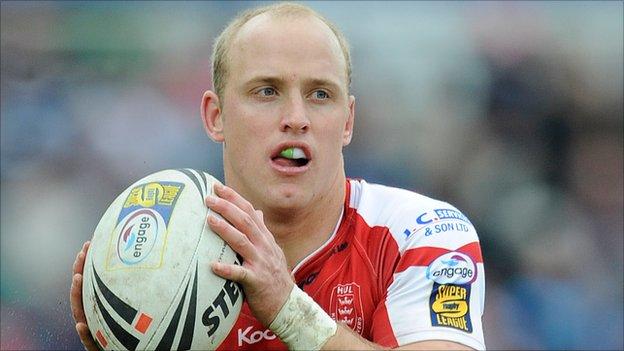 The scores were level at the break with tries from Luke George, Scott Grix and Greg Eden for Giants, while Liam Watts, David Hodgson and Kris Welham replied.

Shaun Lunt's touchdown was the Giants' only consolation after half-time.

Nathan Brown's Huddersfield knew a win would win back top spot in Super League, having been displaced by Warrington on Friday night.

Likewise, the points were vital to Craig Sandercock's Rovers who, having led at the break in their last two matches, were seeking a first win in three.

They started well in the second half with Michael Dobson kicking the 40/20 and Josh Hodgson scoring from it. Sometimes you have to take your hat off to the better team and that's how they were

In-form Giants made the most of the opening stages when George finished off a flowing move for his 10th try in seven games this season.

That took him one clear of Wigan wing Josh Charnley as Super League top scorer, Danny Brough adding the first of his three kicks.

The Giants' hero then turned villain when he spilled Michael Dobson's high ball under pressure from Kris Welham and Liam Watts capitalised to level with a converted try.

There was some controversy about the Giants' second try, with a forward pass missed by referee Ganson before Grix showed pace to break down the left and touch down in the left corner.

Much of the Giants' best work came down their left, through the pace of George and Wardle, and another slick move allowed full-back Eden to open up a 12-point lead.

However, the Robins forced their way back into it when the Giants had looked in total control.

Referee Ganson made up for his earlier error when he spotted a forward pass in the build-up to a try by George and Rovers took full advantage to score through David Hodgson after Dobson's sniping.

The hosts then levelled when an incisive run from hooker Josh Hodgson ended with a pass to Welham, who scooted over to level.

Josh Hodgson then romped through from Dobson's inside-ball to give Rovers the lead for the first time.

With captain Kevin Brown off injured for Huddersfield, the Robins took advantage of confusion when Dobson's vision picked out Taylor.

Shaun Lunt came on to narrow the deficit for Huddersfield with his first score of the season, but Sam Latus powered over to restore the two-try cushion.

Rovers stood up to Giants' pressure, having the last word when Dobson again forced the issue, and Mickey Paea finished off late on to add additional gloss.

"We finally got an 80-minute performance. We were consistent in our endeavour and application throughout.

"When you play a top side you need all 17 players contributing and I thought they all did. This win will instil some self confidence and belief in the boys.

"I know we have a pretty good football team here and I know we have been competitive in every single game we have played so far this season."

"When we led 18-6, we definitely had one or two blokes who were well below where we would have liked them.

"Both of our tries came from the back of the field which was great. But, when your attitude is just okay and you're playing a side like Hull KR who are very dangerous, we got what we deserved.

"Rovers went in at half-time with their tails up with two good quick tries and they started well in the second half with Michael Dobson kicking the 40/20 and Josh Hodgson scoring from it. Sometimes you have to take your hat off to the better team and that's how they were."