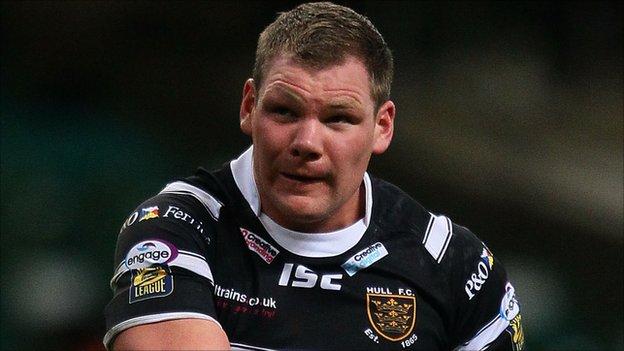 Tickle ran in a try and kicked six goals for the Airlie Birds to take his tally over 2,000 points and into eighth in Hull FC's all-time scorers list.

The home side brought Danny Orr and Josh Griffin back into their ranks following injury, a boost for head coach Ian Millward as they sought a first win since the opening Super League weekend.

In contrast, Peter Gentle's Black and Whites were on a three game winning run after hammering Widnes at the KC Stadium last weekend.

And it was Hull who made the early running when Tongan forward Sam Moa took advantage of good field position to power over.

First, Youngquest rounded off a fine Rangi Chase pass and then, when Tickle's restart fizzed into touch to turn over possession, Walker finished off another good move to put the Tigers ahead.

Manu brought Hull back into the game when he converted a pacy break from Turner before, with Chase the provider, Cas added to the tally through Millington.

Turner got his reward for teeing up Manu, when he left fellow three-quarter Josh Griffin in his wake to score for Hull, Tickle ending the first half scoring with a penalty.

Frustrations within the Cas ranks appeared to be showing when Owen was involved in an exchange with Hull supporters behind the goal in the build-up to the kick.

After the break, Tickle picked up his try but suffered a knock in doing so, Rich Whiting missing the conversion. And, after Tigers indiscipline again handed Hull opportunities to press, Seymour crossed, Tickle adding the extras.

Griffin and England wing Briscoe then traded tries, the former collecting his eighth of the campaign, before Manu ran in a second when Briscoe turned creator.

The final try of the game just before the hooter went to Castleford prop Brett Ferres, a mere consolation.

I thought at times there wasn't a lot between the two teams.

"Our effort's good and our energy's good, but some of the errors we come up with hurt us. They are just little things, but it takes the pressure off the opposition or creates pressure back on us.

"We played a lot better than last week, played with a lot more energy and ruthlessness, but the points we are conceding; it is something we need to continue to work on."

"We had a good talk at half time about having an attitude adjustment in defence as we went away from what we were supposed to be doing.

"We played a bit of touch football and I think we thought we were in for an easy afternoon and to Castleford's credit they really came at us hard.

"We got a bit too fancy and it was one of those days where we weren't prepared to get down in the gutter in the first and get dirty with them."