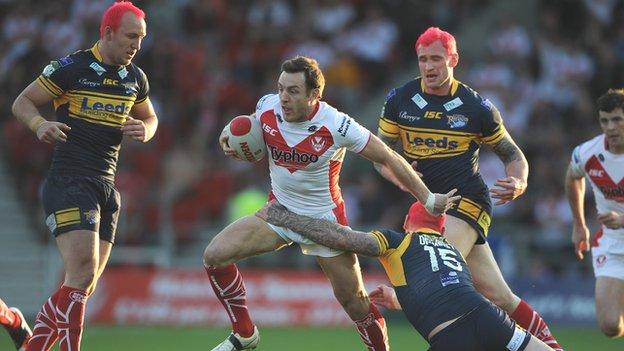 St Helens responded to the sacking of coach Royce Simmons with a drubbing of Super League champions Leeds.

Saints raced into an early lead with tries from Ade Gardner, Gary Wheeler and two from fit-again Jonny Lomax.

Red-faced Leeds' defence was shambolic, parting to allow Paul Wellens to glide over after the break, but Zak Hardaker then responded for the visitors.

Gardner and Wheeler added a try each to Lance Hohaia's score as Lomax added seven conversions for a 22-point haul.

The game was the first chance for new coaching team of Mike Rush and Kieron Cunningham to show their impact.

And, against the team who beat them at Old Trafford for the fourth time in five years in last season's Grand Final, it proved immediate as Saints claimed thir first win in six matches.

Leeds had won their last five matches, starting with the World Club Challenge victory over Manly.

But the Rhinos, who gave a debut to 18-year-old stand-off Stevie Ward, clearly missed injured duo Danny McGuire and Brent Webb and also lost the pivotal Rob Burrow with a shoulder injury.

But, sporting brightly dyed, supposedly red hair in aid of Sport Relief, they also proved far too charitable on the park, gifting an 18-0 lead to Saints inside 12 minutes.

With just three minutes gone, Gardner, leapt high above Ryan Hall to gather a superb cross-field kick from James Roby - in his first game back after tearing a thigh muscle three weeks ago - before Lomax converted.

The Saints scrum-half then benefited from sluggish defending when he pounced from close in before converting his own score.

Kylie Leuluai, who missed the tackle that allowed the Saints number seven to score, left the field soon after but the Rhinos conceded again.

Wheeler's try was all about Roby's line break when he fed Wilkin, who put the winger through.

Lomax went over under the posts after some superb offloading cut open Leeds' poor defence.

Roby nearly scored a well-deserved try as the Rhinos struggled to live with Saints' pace.

Tony Puletua nearly put Lomax through for a first half hat-trick but a Leeds hand prevented the crucial pass being received.

After the break, Lee Smith conceded a needless goal-line drop-out and Wellens cruised over as the Leeds defence opened up before him.

Ben Jones-Bishop looked to have got Leeds off the mark on 48 minutes but Kallum Watkins was pulled up for a knock-on.

Hardaker - the only Leeds player not to have opted for the shocking pink hair treatment - cashed in on poor Saints tackling to make made amends under the posts minutes later, Sinfield converting as the scoreboard finally sparked Leeds into urgency.

But, when the Rhinos' goal-line drop-out did not go 10 metres, the superb Hohaia dummied and stepped inside to crash over.

Jon Wilkin's 50-metre break then allowed Saints to shift the ball wide right for Gardner to exploit the overlap.

Wheeler was on hand to go over as Saints pressed at death but Lomax - who had provided the telling pass - could not make it eight from eight with the tee.

"I think you put that one down to the players. They really understood where the club was and what position we were in. Obviously they've looked long and hard at themselves.

"The shock of losing their head coach and assistant coach has really hit home with them that they need to fix it up.

"Maybe being at home and playing against a really big team was a good thing. It really focused the mind. "We tinkered with a few things and moving Lance Hohaia to half made a bit of a difference."

"It was absolutely not about the red hair and to call us completely unprofessional is bang out of order. We're doing that for a fantastic cause. A few people had a giggle and that was over and done with.

"St Helens were great. They played too fast and beat us off the ground. They had some motivation to be good tonight. They were unrecognisable from the team that played in the last three or four weeks.

"We clearly weren't right from the off. We were in freefall and found it hard to get back. Once you've lost massive momentum, it's hard to get back. But we didn't give in. We kept a bit of integrity and that enables us to move on to next week."