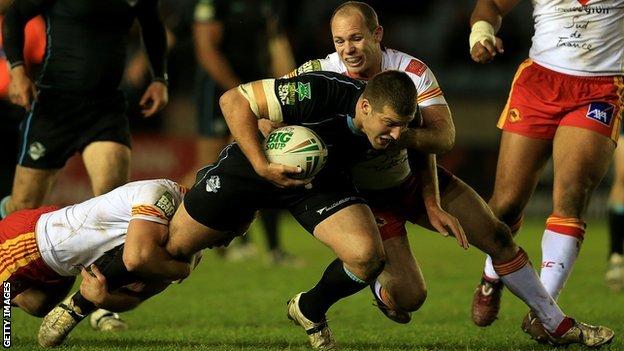 Louis Anderson and Vincent Duport bagged a brace of tries apiece as Catalan Dragons brushed aside London Broncos 36-18 at The Stoop.

The pair went over inside 15 minutes as the visitors dominated, but Shane Rodney's try meant the hosts turned around just four points down.

Duport and Anderson then struck again before Steve Menzies went over.

Luke Dorn and Michael Robertson hit back for the Broncos but Scott Dureau and Leon Pryce's tries ensured victory.

Pryce had a hand in the first two scores as he began the move that saw Anderson go over before his kick put the Londoners under pressure for Duport to profit.

The hosts looked a shadow of the side that had demolished Wakefield 36-0 just five days ago and lacked a cutting edge to penetrate the solid Dragons defence.

Their only score in the opening half came after Damien Blanch knocked on near his goal-line and Rodney pounced from the resulting scrum.

Although the Broncos were just a score behind at half-time, Duport struck first after the interval, following a penalty close to the Londoners' line, and Anderson followed when he finished off Dureau's kick.

Veteran Menzies, back from injury, then crossed from close range before, with an hour on the clock, Dorn raced through after Antonio Kaufusi was held up short.

Robertson brushed off several attempted Dragons tackles to give his side's score some respectability but Pryce had the last word when he burst over late on.

"They came out of the box quickly and we struggled to contain them.

"I thought in the first half we did OK and were in the game. We should not concede four tries in 10 minutes and we have to get better at stopping momentum.

"There were some poor defensive reads and some poor refereeing decisions and that gave us too much to do.

"If you look at the overall game we did pretty well against a very strong side but things do not work like that."

"I think we are just starting to get things going. We have been OK so far this season but I cannot say we have been playing great football.

"But that is two good starts in the past two games and we need to push that on.

"I think this period from Easter to the cup games is absolutely vital as the league begins to separate a bit after that.

"We hit the ground running tonight and we need to back that up."