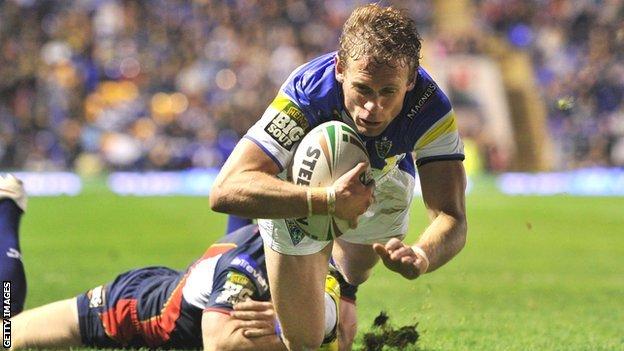 Chris Riley's hat-trick helped Warrington to the top of Super League as they came from behind to beat local rivals Widnes 46-12.

Tries by Chris Dean and Dave Allen, both converted by Pat Ah Van, got Widnes off to a flying start.

But a Chris Bridge brace and a Riley try, all converted by Brett Hodgson, gave Wire the half-time lead.

The hosts then cut free, Hodgson, Ryan Atkins and Brad Dwyer all crossing before Riley went over twice late on.

Dean gave bottom-of-the-table Widnes the dream start when he dived over from close range after Joel Monaghan was held up in goal and the Wolves conceded an in-goal drop-out on three minutes.

And it got better for Denis Betts's men when Dave Allen cruised under the posts soon after - Ah Van converting both scores for a shock 12-0 lead.

But the Wolves, who were resting a host of experienced players ahead of Monday's trip to Catalonia, hit back with 46 unanswered points.

A clever run by Gareth O'Brien, back with Warrington following his loan at Widnes, made room for Bridge to go over. And, as Hodgson lined up the first of his seven goals, coach Tony Smith called a team meeting on the touchline to rally his men.

It appeared to work as Bridge fended off Willie Isa inside a minute to race over and double his tally, the full-back converting magnificently from out wide.

Atkins' quick hands and a deft step off his wing by Riley gave Warrington the lead - with Hodgson again on song - to make it 18-12.

After the break, Rhys Hanbury was desperately unlucky to lose control of the ball against Richie Myler's leg in goal following a superb run that began when he spun out of two tackles.

Hodgson struck back for the hosts and Atkins narrowly avoided the touchline to go over in the left corner and add to the Vikings' woes four minutes later.

Dwyer then scooted over a yard out from dummy-half before Riley took the ball out wide for a late brace to complete his hat-trick.

"Widnes were terrific in the early part of the game, running hard and they had momentum.

"That's when we had to take some things into our own hands. I really liked the toughness of my players."

[On his pitch-side intervention at 12-0 down] "I don't know what the rules are. If it's contrary to the rules, I'll handle whatever the consequences are.

"I think there are bigger issues in the game at the moment than whether a coach speaks to a player on the side line."

"We had to take it into our own hands, otherwise we were going to be there all day. We had to try and speed things up and, when we did, we were OK."

"I think Widnes fans saw some of the things we're after, which is enthusiasm and effort.

"We kept hold of the ball and put them under pressure in the first half but then reverted to type in the second half.

"We over-tried things, lost ball and kicked poorly. We're not stringing two 40 minutes together. Last week it was 25 minutes, this week 40 so hopefully we can put 60 minutes together and hold and maintain that."