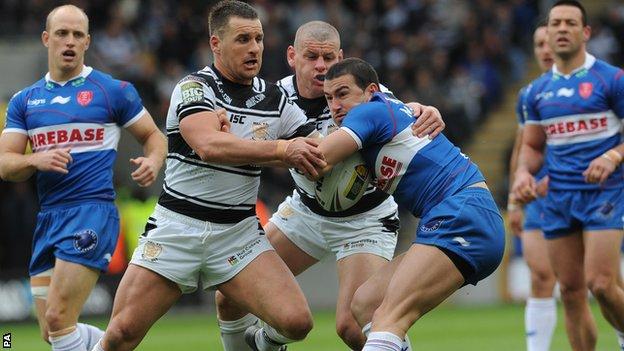 Jordan Turner ran in a hat-trick as the Black and Whites made it six straight wins with victory over the Robins in the Hull derby at the KC Stadium.

The home side had to come from behind, running in five second-half tries after Hull FC old boy Craig Hall had put Hull KR ahead on 33 minutes.

But the returning Lee Radford's try levelled it, for 6-6 at the break.

And Turner's second-half treble, allied to tries from Kirk Yeaman and Brett Seymour, turned it into a landslide.

Hull's sixth straight win catapulted them up from fourth in Super League, top spot being achieved temporarily, if only for two hours, by Turner's last-minute hat-trick clinching try.

But the real talking point was Hull assistant coach Lee Radford making a return to the playing field for the first time in six months and marking the occasion with one of his side's six tries.

Radford came out of retirement to help a Hull injury crisis which ruled out eight players and which could have got worse as stand-off Richard Horne faces a potential lay-off with a groin injury which almost certainly rules him out of Monday's trip to Huddersfield.

But, after Radford turned his back on the last year of his playing deal with Hull at the end of last season to take up an offer to be new coach Peter Gentle's assistant, the 32-year-old prop showed that there is still plenty of life left in his legs.

Hall, who had earlier knocked on with the try-line at his mercy, rose highest to claim Aussie scrum-half Michael Dobson's kick and touch down for the game's opening try. But Radford, back on the field after turning back the clock in his first spell with a series of barnstorming runs, quickly responded with a try by the posts.

Sparked by his equalising first-half try, he then led from the front with his efforts in the second half, the former Bradford Bulls Grand Final winner helping his side lay the platform for what became a one-sided encounter.

And, in a game that for long periods failed to live up to its pre-match billing as the biggest derby in rugby league, the home side finally got the better of their dogged opponents in the game's final quarter, four of their six tries coming in the last 15 minutes.

Given the nip-and-tuck nature of the opening 40 minutes, parity on the scoreboard was a fair reflection heading into the break. But, within a minute of the restart, FC had their noses in front for the first time when Turner claimed his first try after Rovers prop Scott Wheeldon had spilled the ball in front of his own try-line, Danny Tickle adding the second of his five successful conversions.

KR's task in hand only got harder when a penalty for infringement in the tackle handed Tickle an easy two-point penalty in front of the posts to extend his side's lead to 14-6.

Turner was handed time and space out wide to go over for his second, followed in quick succession by tries for homegrown favourite Yeaman and scrum-half Seymour.

Then, needing a 28-point victory to go top, even though it was only for a couple of hours until Huddersfield had beaten Salford, it was left to the galloping Turner to ice the cake from 70 metres out after the final hooter had gone.

"Lee Radford was never going to disappoint. I knew he'd be up for it.

"This was a game made for him and I knew he would come in and do a terrific job.

"Hopefully that won't be his only game over Easter and he'll be able to play on Monday at Huddersfield.

"It is a bit early to say but we don't have anyone else to bring in and if anything the players are going the other way, so we need him."

"I feel for the fans because we really wanted to win this one for them.

"Unfortunately, in the first half, we had a few opportunities and didn't take them.

"In the second half we fell into a big hole and Hull are way too good for that. We had to do an awful lot of defence and Hull played great rugby, so full credit to them.

"I'm hoping we can pick the boys up now because we need to recover, pick ourselves up and get ready for Monday at Salford."