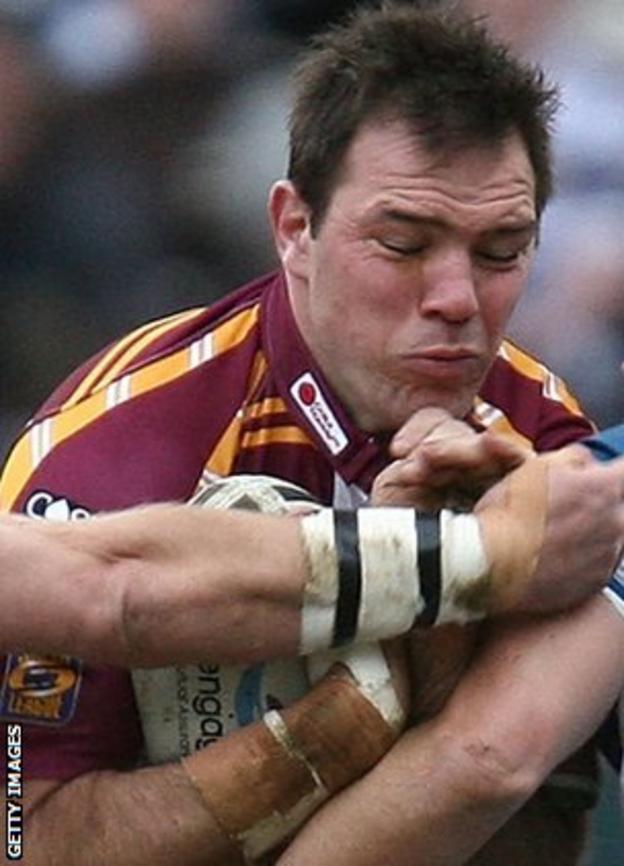 Hooker Tommy Lee ran in two tries as Huddersfield beat Salford to return to the top of Super League.

The Giants lost top spot only thanks to Warrington's win against Widnes on Thursday night, followed by Hull FC's victory in the Hull derby.

But, although Salford ran in two tries, the Giants responded well with tries from Jermaine McGillvary, Michael Lawrence and Lee.

It was Giants coach Nathan Brown's first game since the announcement that he is to take charge at St Helens next season - and an ultimately routine victory could have been even more emphatic if the Giants had not seen three tries ruled out.

Salford made a blistering start when Broughton dived over just five minutes into the contest, but Daniel Holdsworth missed the kick, allowing the Giants to quickly take the lead through a converted McGillvary touchdown.

Super League's joint top try scorer Luke George then turned creator, powering down the left touchline before passing inside for the on-rushing Lawrence, who was making his 100th appearance for Huddersfield at the age of just 21.

After Leroy Cudjoe had a try ruled out for a double movement, Salford, coached by former Huddersfield player Phil Veivers, reduced the deficit after 25 minutes with a sweeping cross-field move that ended with Luke Patten putting in Moon for a try in the left corner.

But the home side strengthened their grip on the contest with pre-season signing Lee's first try, created by a brilliant offload from David Faiumu, as he held off two defenders. And the Giants ruthlessly put Salford to the sword in the second half.

A slick interchange of passes in the 44th minute between Cudjoe, Brough and Lawrence saw a try for Cudjoe ruled out. But two touchdowns in four minutes mid-way through the half killed off any hope of a Salford recovery as the Giants battered their way to a sixth win in seven games.

Lunt went over after 49 minutes, Lee adding his second soon after before Eden's solo run led to Kevin Brown going over.

This one was also ruled out, but Eden dived over late on, Danny Brough making it six out of six conversions of the boot - to take Super League's top kicker to 44 for the season.

"Any time you've scored 36 points and had three tries ruled out means you've done well. And I've no problem with the ones that were ruled out.

"Salford have got forwards who can be dangerous and they were on top in the first half. To restrict them to only 10 points is therefore pleasing.

"But I thought our defence wasn't good in the first half for the second time in two weeks. We did better after the break, but it's something we'll have to look at."

"I thought it was a pretty scrappy affair for both sides. We just didn't really gel as a team today. We played more as individuals than as a team. We spoke about discipline and it's something we need to address again.

"I need to speak to the referees because, five or six games into the season, we were the best disciplined side in the competition and I'm wondering how things have changed so much.

"If I was a fan watching that I'd be sticking needles in my eyes. But, as a coach, it was even worse.

"We worked a lot in the week on contact and the wrestle, yet Huddersfield still out-wrestled us. We'll have to look at that again. It's a matter of pride. You don't want to lose like that."