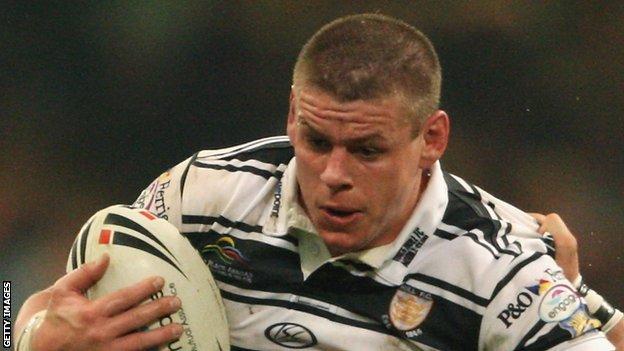 Hull FC assistant coach Lee Radford is to come out of retirement and is set to feature in Friday's derby with Hull KR.

The 33-year-old prop retired at the end of last season to take up the coaching position with the KC Stadium side.

Boss Peter Gentle told BBC Radio Humberside: "We've sent out an SOS to Lee and we registered him on Monday.

"I mentioned to him after the win against Bradford that we were very light in that position and asked him if he'd be willing to step in."

Radford has played in just one match since retiring at the end of last season - a testimonial game against his former club Bradford back in January.

But an injury crisis at the Black and Whites means the former England forward, who captained FC in the 2008 Challenge Cup Final, is required.

Gentle added: "Eamon O'Carroll picked up an medial ligament strain in the Bulls game and he's out for six to eight weeks and Tony Martin has been struggling with a neck injury for some time so he needs a break.

"Chris Green's out as well so that's a fifth front rower we're without but there's no point getting down about it."

In addition forwards Mike Burnett, Aaron Heremaia, Mark O'Meley and Joe Westerman are all injured while Sam Moa is in Australia on compassionate leave.