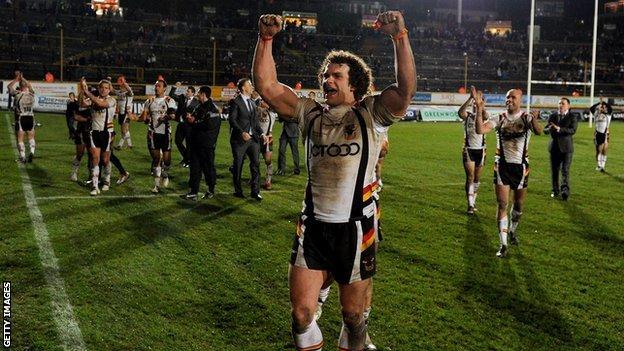 In front of a healthy gate of 20,851, Zak Hardaker's try was the only score before the break and it took until 65 minutes to force another breakthrough.

Not even the Bradford prop's late dismissal for a spear tackle on England captain Jamie Peacock could take the shine off a tremendous performance.

Bradford were also down to 12 men earlier when Olivier Elima spent 10 minutes in the sin bin.

On a night of high emotion at Odsal, a bumper crowd of 20,851 turned out in Bradford's hour of need, ahead of Saturday's expected announcement on the club's future following their frantic fund-raising appeal.

Already without 10 members of his senior squad through injury, Bradford coach Mick Potter was forced to reshuffle his side after losing winger Karl Pryce in the opening stages.

No matter what happened, the players were going to do whatever it took to get the result

The champions, reeling after successive defeats by St Helens and Huddersfield, were still without their two key creative sparks, long-serving half-backs Danny McGuire and Rob Burrow, but that gave teenager Stevie Ward another chance to demonstrate his potential.

Defences were on top throughout a scrappy first half, the only score coming after 14 minutes when Leeds centre Hardaker touched down for the fifth consecutive game, taking Brent Webb's pass and stretching for the line.

Elliott Whitehead went close eight minutes into the second half when he was held up on his back over the line, while substitute prop Phil Joseph was brought back for a forward pass.

But the frustrations of such an intensely dour contest boiled over into a couple of minor skirmishes, with French forward Elima sin-binned on the hour by referee Ben Thaler for dissent.

Down to 12 men, the Bulls produced their best spell of the match as the crowd got behind them.

Winger Shaun Ainscough, on his first appearance of the season, broke clear only to fail to use his support, but Bradford maintained the pressure and, after Heath L'Estrange's bouncing kick caused havoc in the Leeds defence, Langley touched down.

With the scores tied, Sammut maintained his composure to land the angled conversion. And it was no surprise when the Bulls extended their lead, Jeffries gathering in his own kick to grab the second try, Sammut's second goal giving the home side an eight-point cushion.

Bradford ought to have added another try, Danny Addy breaking clear to get Ainscough in sight of the line, only for Leeds to scramble away the danger.

The game ended on a sour note with referee Ben Thaler deeming Hargreaves' tackle on Peacock worthy of a red card, but the home section of the excellent Good Friday crowd were already in celebratory mood by then.

"The crowd was good. I think that helps. And there are a few things still going on. I'd like to think everything will be OK, but you never really know until the announcement.

"I'm very proud of the players for the way we performed tonight and the way they held together under a bit of adversity. No matter what happened, the players were going to do whatever it took to get the result.

"Both teams were desperate to get the two points. I thought we were a little bit too conservative in the first half, but we got the hang of it better in the second half. We got the ball to the edges a little more.

"I've had a look at it and I think Ben Thaler got the wrong guy. I don't think there was any intent. The tackle was released early. I've got every faith in the system."

"JP is in some pain. He's got some damage to his neck, but thankfully he's up and about, he's walking."

"I thought we defended really strong and we created enough chances on attack, but our skill was just poor.

"It's just the way it is at times. We were just off with the ball."