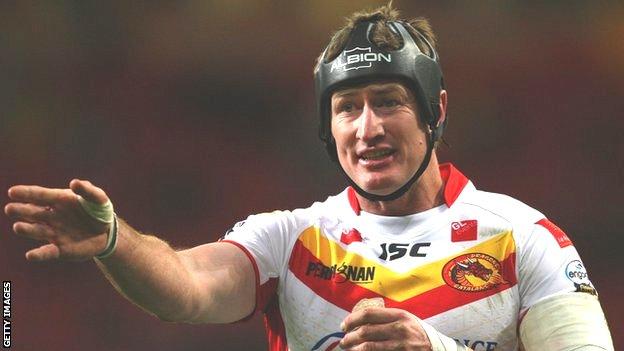 Veteran Steve Menzies ran in two of Catalan Dragons' eight tries as they crushed Warrington in front of a record Stade Gilbert Brutus gate in Perpignan.

Mickey Higham and Chris Riley ran in first-half tries for Wire, for whom sub Brad Dwyer scored late on.

But Tony Smith's side shipped 40 points for the first time in three seasons.

The bank holiday Easter Monday crowd of 11,500 in the sun-baked south of France was a record for the Catalans at their regular Perpignan home as Trent Robinson's side impressively maintained their 100 per cent home record.

After surviving a late scare over the fitness of Leon Pryce, who jarred his knee in the pre-match warm-up, the Dragons were two tries up inside the first seven minutes.

I think we're in a better place than last year. We had lost four games at this stage last season, whereas today is only our third loss of the season

After Tongan forward Paea had powered over, Pryce's key offload then set up a gallop down the left, finished off in the corner by Bosc.

But Scott Dureau only kicked the second of them. And, when Higham dummied his way over just before the quarter hour, Warrington were back within touching distance at 10-6 down.

Dureau and Pryce then set up Menzies for the home side's third try. But, after Dureau had added the goal, Wire again hit back quickly.

Mike Cooper got away with a blatantly forward pass out of the back of his hand, allowing Riley in at the left corner.

But the Catalans' 10-point cushion was soon restored when Hodgson and Joel Monaghan made a mess of defending a Dureau bomb, which they allowed to bounce, allowing an easy try for Anderson, lining up against his old club for the first time since moving to Perpignan from Warrington at the end of last season.

To add to the visitors' problems, already without hooker Michael Monaghan (knee), they had then also lost scrum-half Richie Myler with a groin injury. And the Dragons took further advantage, extending their lead when Sa ran in their fifth try 10 minutes after the restart.

Therer were further tries for Sa, 37-year-old Menzies and Millard before Dwyer got clear down the left to close the contest with Warrington's third try, but it was far too late to prevent the two sides swapping places in Super League.

Catlans, who have a game in hand, are now up to third, while Wire's third defeat of the campaign drops them down to fifth.

"We started a whole lot better today than we have in recent weeks, and that is good to see, that we are starting to win games from in front rather than coming from behind.

"We won the game today because of our defence. We only conceded two tries throughout the game and then one right at the end. That gives us good impressions and good structures to work on. I thought we were outstanding in our defensive efforts.

"There was a 15-minute period in the second half where they were camped on our line and we had to scrap and we had to scramble, but I felt at that time we had won the game, the passion and desire the guys had out there showed us all that.

"Daryl Millard then goes and scores his try and that seals the win. I'm really proud of what we produced defensively out there and we won the game because of it."

"It is a great disappointment to come over here and lose in the way we did. That being said, we have to keep positive and I think we're in a better place than we were last year.

"We had lost four games at this stage last season, whereas today is only our third loss of the season.

"Going into the game without Michael Monaghan was going to be a tough ask and that became more difficult when Richie Myler left the game with a groin injury.

"With neither of those players in the side we found it difficult to find opportunities in and around the ruck and we also lacked a little direction that any side would miss if you had those players missing."