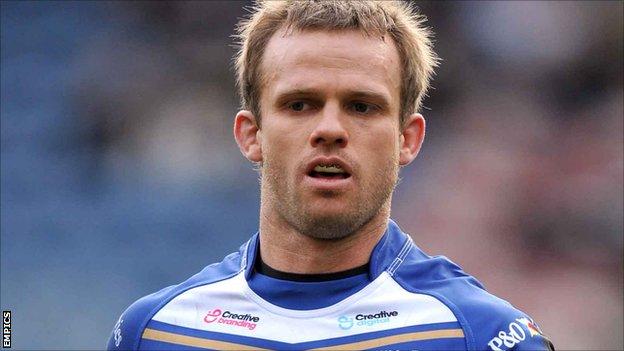 Warrington ran in eight tries as they eased into the last 16 of the Challenge Cup at the expense of Keighley Cougars.

After a 15-minute delay to kick-off, Joel Monaghan, Ben Westwood, Chris Hill and Rhys Williams went over for the visitors in the first half.

But Keighley added some respectability to the scoreline with tries from Richie Barnett and two from Sam Obst.

The Cougars lost 80-0 to Warrington at the same stage of the Challenge Cup last year and hopes of an unlikely upset were dashed when the Wire ran in four tries in the opening 22 minutes.

After a punishing run of Super League fixtures during the Easter period, Sunday's game represented a chance for Wolves coach Tony Smith to rotate his squad.

Full-back Jordan Burke was handed his debut, while youngsters Dwyer, Ben Currie and Gareth O'Brien all gained more valuable time on the field.

"I thought at time we were a bit silly with the ball and didn't do what we wanted to at the end of sets, but defensively I thought we were pretty good.

"They are a quality team and, if I'm honest, I wasn't really thinking about winning the game today, it was more about performance.

"I wanted us to score points so I was happy with the last 10 minutes."

"I thought we were pretty good generally. There are some aspects of our game we need to get in order and we managed to do that.

"I thought our defence was very solid and we went about it in the right way.

"There were some things we weren't happy about last week and we managed to put them right. That was good for us and we'll take some confidence out of that.

"I thought Keighley were very good. We played them at the same time last year and they are a much better team now."